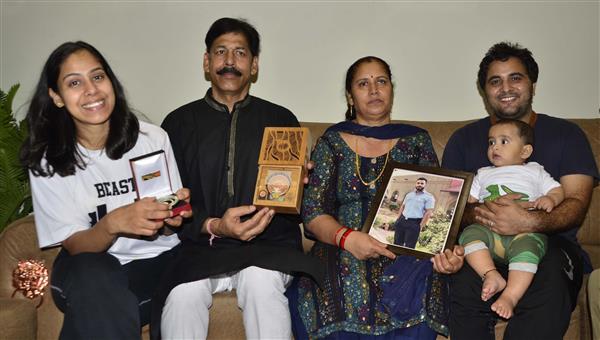 Brij Lal and Asha, parents of weightlifter Vikas Thakur, along with their daughter and son-in-law, in a jubilant mood after learning about their son's achievement, in Ludhiana. Photo: Ashwani Dhiman

Celebrations erupted at the residence of star weightlifter, Vikas Thakur, situated at Eldeco Estate on GT Road, near Jalandhar bypass here, as he won silver medal in the ongoing Birmingham Commonwealth Games, last night. He finished runner-up in the 96-kg weight category to win a silver medal. Don Opeloge of Samoa won gold medal with the record lift of 381kg while Fiji’s Taniela secured bronze medal with a total lift of 343 kg.

Talking to The Tribune, Brij Lal Thakur, father of ace weightlifter said he and his wife Asha Thakur, along with some of their relatives and neighbours, were glued to the television to watch the ongoing Commonwealth Games proceedings in the UK.

“As Vikas lifted total 346 kg (snatch 155 kg; clean and jerk 191kg) to fetch silver medal, we were thrilled. We cut a cake to celebrate his achievement,” he said. “We are receiving congratulatory calls from sports lovers and well-wishers. We thank all for their affection and joining us in celebrating our son’s success,” he added.

This was third medal for Vikas in three successive editions of the games. Earlier, Vikas clinched silver medal in 85 kg weight group in 2014 at Glasgow and bagged bronze medal in 94 kg weight category at Gold Coast in 2018.

Speaking to this correspondent over phone from Birmingham, Vikas, a Warrant Officer with Indian Air Force, said it was with blessings of his parents, good wishes of fellow countrymen and guidance under his coaches Sandeep Sharma and Vijay Kumar that he could achieve this feat.

Vikas, specially mentioned that he took up the game at the age of nine in Ludhiana Weightlifting and Bodybuilding Club here at Rakh Bagh where former international weightlifter, Parvesh Chander taught him basics of the game.

“I owe my success to Parvesh sir under whose guidance I learnt and achieved the desired results,” said Vikas.

“His achievements will certainly motivate young boys and girls to take an active part in sports and bring laurels to their country and parents as well,” he said.