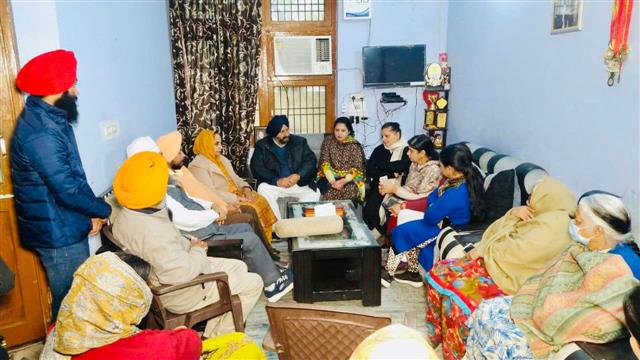 The poll campaign of SAD-BSP candidate from Ludhiana West Maheshinder Singh Grewal is gaining momentum with each passing day as Grewal was leaving no stone unturned to reach out to the electorate and make his mark as a deserving candidate.

Interacting with residents of Shaheed Bhagat Singh Nagar and Pushp Vihar on Barewal Road, Grewal said all sections of people were suffering and irked over wrong and anti-people policies of the ruling Congress due to which they were extending support to the SAD-BSP alliance.

“I promise residents that if they bring the SAD-BSP alliance to power, it will take the state on the path of progress and resolve grievances of people,” he said.

The senior SAD leader said they were raising common issues such as deteriorating law and order situation in the state and the increasing menace of drugs, besides other problems.

Grewal asserted that law and order had completely failed in the city, or rather the entire state for which politicisation of the police was squarely responsible. Moreover, the problem of drugs was also destroying several families across the state.

He emphasised that these problems would be addressed on a priority basis if people put their faith in the SAD-BSP and bring these parties to power.

“Strict action will be taken against those who would give shelter to wrongdoers,” he said while sharing with residents that his aim was the overall development of the constituency.

Meanwhile, a veteran leader of the SAD, Rupinder Singh Sandhu, has rejoined the party under the leadership of party president Sukhbir Singh Badal which had given further impetus to the election campaign of the SAD-BSP in the Ludhiana West constituency.

Grewal congratulated Sandhu and welcomed him to the party fold.

He said Sandhu was among the senior leaders of the party in Ludhiana and had devoted his service to the party for the past several years. His involvement in active electioneering for the party had given further strength to poll prospects of the alliance.

District president of the SAD Harbhajan Singh Dang, Bibi Paramjit Kaur, Gurdial Singh Papp were among those others present during the meetings.