Districts crosses 1K-mark in past week; 2nd in state in deaths and case fatality rate 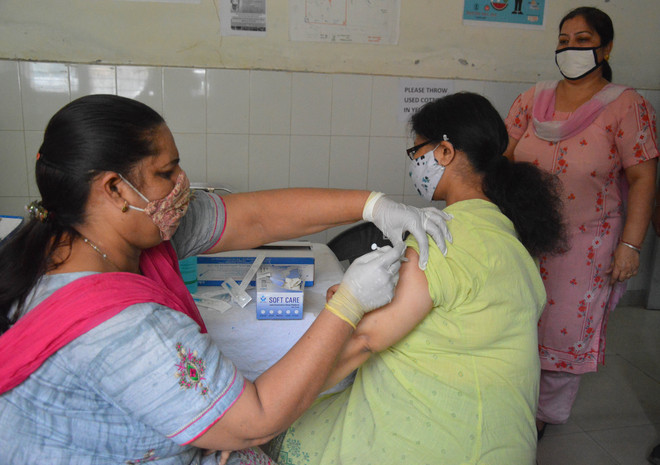 A woman gets vaccinated against Covid in Ludhiana. Inderjeet Verma

In what appears to be the volatile situation arising out of the devastating second Covid wave, Ludhiana’s average daily case count has crossed the 1,000-mark in the past week.

The exponential rise could be gauged from the fact that the count of daily infections mounted almost three times in less than a month. The district had recorded an average 341 daily cases between March 10 and April 13, which had risen to 717 between April 15 and 21, and 934 between April 20 and 26.

With this, Ludhiana was way ahead from all other districts and has become the epicentre of virus infection in the state.

Among other worst-hit districts, Mohali reported 858 average daily cases between April 23 and 29, while Jalandhar logged 571, Bathinda 527, Patiala 519, and Amritsar 500 new infections every day.

Jalandhar was the only district among the six worst-hit districts, which reported 10.2 per cent average weekly positivity rate, lower than that of Ludhiana.

On the deaths and case fatality rate (CFR) front, Ludhiana reported 12 average daily Covid deaths at 1.1 per cent CFR between April 23 and 29 and was placed at second spot in the state after Amritsar, which recorded the maximum 13 deaths at highest 2.5 per cent CFR during this period.

Among other high caseload districts, Mohali reported nine daily deaths at 1 per cent CFR, Jalandhar six at 1 CFR, Bathinda seven at 1.3 and Patiala logged 10 daily virus casualties at the CFR of 2 per cent in the last week.