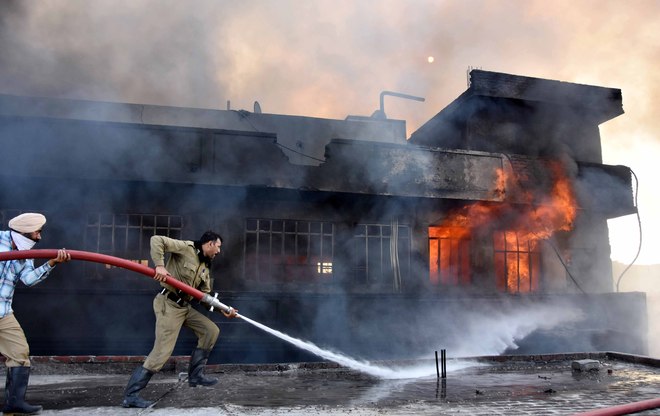 Several persons have lost their lives in fire incidents in Ludhiana. file

Despite hundreds of fire incidents taking place in the city every year, no audit has been done to check the fire safety arrangements at factories, commercial complexes, institutes and other buildings in the city.

Several persons have lost their lives, while goods worth lakhs of rupees have been gutted in the fire incidents in the past. But, majority of buildings have not ensured fire safety arrangements. Even required arrangements have not been made at government offices, including the civic body’s own offices.

According to information, a very less number of buildings have obtained fire safety certificate/no-objection certificate but there is no check on the buildings violating the norms.

After a plastic-manufacturing factory near Suffian Chowk had gone up in flames and collapsed in November 2017, killing 16 persons, including nine firefighters, MC officials had announced that a survey would be conducted to check violations and fire safety arrangements in the buildings, but to no avail. However, a few buildings were checked in 2018 by the fire wing of the MC but no survey was conducted in the entire city.

There is no check on the hosiery units, factories, godowns and commercial units running from the narrow streets of the city. The fire tenders can’t even move in such streets. In 2015, a major fire had broken out at three units at Dal Bazar, near Chaura Bazar, but the fire could be doused after three days as the fire tenders could not enter the narrow streets where these units were located.

A former councillor, Parminder Mehta said, “Multi-storey commercial buildings, markets or factories have come up in the narrow streets of Dal Bazar, Talab Bazar, Gur Mandi, Pindi Street, Mochpura Bazar, Mohallan Suddan, Daresi and other areas in the old city but there are no fire safety arrangements. There are no emergency exits in most buildings. A number of fire incidents have taken place in narrow streets. The MC and its fire wing should take necessary steps to avoid fire incidents in such areas.”

Mehta said many water hydrants that had been installed in the old city were not functioning properly. The authorities should take steps to repair these hydrants, he said.

There is no check on illegal or improper stocking of harmful chemicals and hosiery waste in factories or godowns. Major fire incidents have taken place in several buildings where such chemicals or waste were stored. Sources said out of the total fire incidents every year, around 70 per cent of incidents take place at industrial units.

Municipal Town Planner SS Bindra said the fire wing staff was responsible for checking the fire safety arrangements. Punjab Fire Services officials had earlier claimed that a survey to check the buildings would be done once a separate Fire Directorate in Punjab was set up. In 2017, the then Local Bodies Minister had also announced that the Fire Prevention and Fire Safety Act would be enforced strictly.