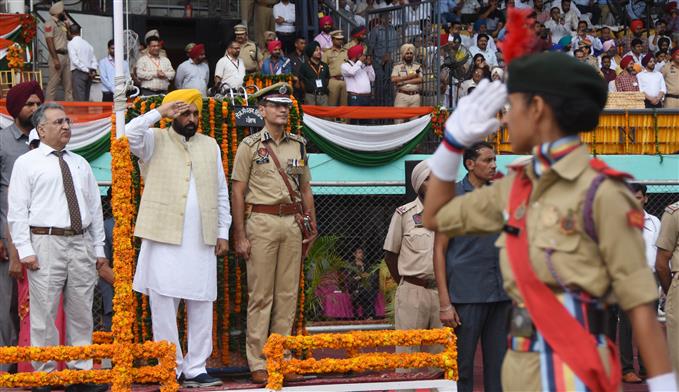 Chief Minister Bhagwant Mann receives the guard of honour from a contingent during the Independence Day function at Guru Nanak Stadium in Ludhiana on Monday. tribune photo: Himanshu Mahajan

“I have come a long way from starting my career as an artiste and now being a Chief Minister but Ludhiana always remains close to my heart,” Bhagwant Mann has said.

I had never ever even dreamt of being a politician, which I still feel I’m not. I chose the field only with an aim to render selfless service to society — Bhagwant Mann, CM

In an exclusive chat with The Tribune on the sidelines of the state-level Independence Day celebrations, which he presided over here on Monday, the CM said he was well aware of each nook and corner of Ludhiana as he had spent much time as an artiste here.

“I had never ever even dreamt of being a politician, which I still feel I’m not. I chose the field only with an aim to render selfless service to society,” the state’s first artist-turned-Chief Minister said.

He said being the CM of the state, he would ensure betterment and welfare of each and every part of Punjab but Ludhiana would get special attention due to his long association with the state’s industrial capital.

Promising all-round development of Ludhiana, which he said was popular as Manchester of India, Mann said promoting and facilitating the existing industry by providing them all requisite facilities and services, besides attracting new industry to further uplift the status of Ludhiana as an industrial hub was among the top priorities of his government.

“Scrapping the textile park, which the previous government planned to develop over the Mattewara forest, which serve as the lungs of Ludhiana, single-window service for approval of new industries and expansion of existing units, best infrastructure, peaceful atmosphere for industrialists and their workers, and most congenial system to further promote ease of doing business are some of the many things, which we have already done or are in the process of implementing soon,” he said.

Mann said since he was himself aware of major problems and demands of Ludhiana residents, he had already put the process in motion to redress all such perennial issues and meet the longstanding demands to benefit the people at large.

“Rejuvenation of the Buddha Nullah, 24x7 surface drinking water supply, developing Ludhiana as a smart city by giving facelift to the basic civic amenities, and international airport are already in the works, which we are committed to complete within the stipulated time frame with assured quality control,” Mann said.

He asserted that the Buddha Nullah, one of the most polluted nullahs, which runs almost parallel to the Sutlej through most of the district, including 14-km in Ludhiana city, was being given a new lease of life at the cost of Rs 840 crore, following which its nomenclature will be changed to Buddha Dariya, its water will be made crystal clear and fit for human consumption.

The CM said his government had zero tolerance for pollution, tax evasion, exploitation of industrial workers and all other wrong doings, which would not be tolerated at any cost. “The trade and industry should run their businesses with honesty and within the laid down norms, our government will not give them any chance to complain,” he assured.

Mann added that the aam aadmi (common man) was free to approach him directly for any genuine issue or demand and he would ensure that nobody should face any problem in his regime.

“We have already launched an anti-corruption helpline, which I monitor regularly, and each and every call/ message received on it is duly attended with swift action,” the Chief Minister said, while promising accountable, responsive and transparent public delivery service at all levels.