Members write to CM, minister to direct civic body to do the needful before auction 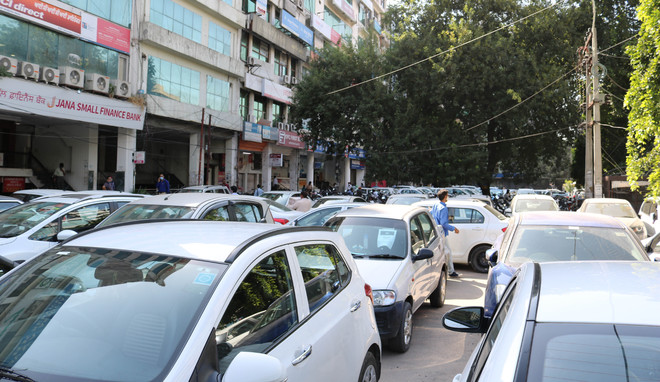 Members of the Feroze Gandhi Market Association have written a letter to Chief Minister Capt Amarinder Singh and Local Bodies Minister Brahm Mohindra against the Municipal Corporation’s upcoming e-auction of parking lots of the market.

Chairman of the association Col Harjap Singh said the MC had failed to mark the fire lanes and remove encroachments from the market.

“Even no demarcation of parking lots has been done but the MC is going to hold e-auction of the lots soon, as per information,” he said.

President of the association PS Gill said: “Without taking any concrete steps on ground to save life and property of visitors and occupants of the market, the MC is going to hold auction of the lots of the market.”

“We had earlier raised the matter regarding the parking lots with the Director of the Department of the Local Government. The director had given directions to the MC to take required measures but nothing has been done so far. Now, the civic body is rushing to auction parking lots without doing anything on ground to implement basic firefighting measures. The MC must take steps for decongestion of the five parking lots so that fire tenders and ambulance could easily move through the market,” he said.

“It should mark “no parking”, “tow away zone” and “fire lanes” in the market. Moreover, there should be provision of fire hydrants in each parking lot. It should also ensure construction of a footpath. In the absence of footpaths, pedestrians are forced to walk on roads, endangering their own life,” he said.

The association has demanded from the Chief Minister and the Local Bodies Minister to direct the MC to pay attention towards their long-pending demands, rather than rushing to auction parking lots.