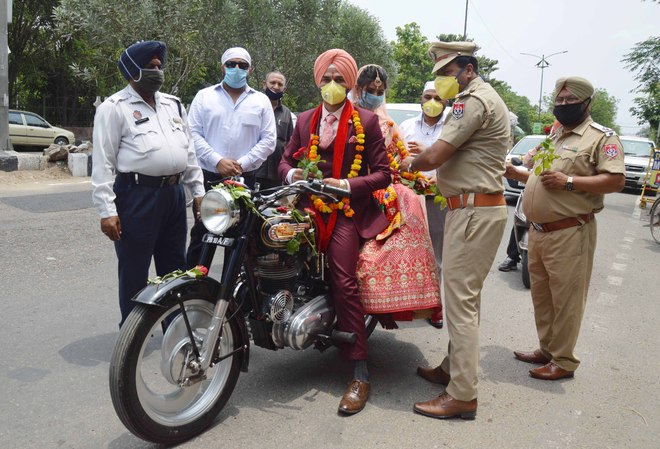 Newly-wed Sahil and Jyoti being greeted by policemen on their way back home after their marriage ceremony. Photo: Inderjeet Verma

Sahil and Jyoti today tied the nuptial knot sans “band-baaja”, “baraat” and a lavish feast. The ceremony was performed under the safety of masks, sanitiser and social distancing.

The bride was given a motorcycle ride by the bridegroom on the way to her new home instead of the traditional “doli” in a decorated car.

The families had planned their engagement for March 24 but the lockdown started that day only, and they had been waiting for the restrictions to ease ever since.

“It may surprise many but we spend only Rs 20,000 on our son’s wedding. We were planning for their engagement function. I went to enquire about a resort for the same, which would have cost us Rs 9 lakh. Since the lockdown was imposed by the Centre, we could not go forward with our plans,” said Amarjit Singh, the bridegroom’s father.

“When we realised that Covid is not a matter of a day or two, we decided to go ahead with a low-key marriage ceremony sans engagement or any other related function,” he said.

“My elder daughter and younger son live abroad and we showed them the entire ceremony live,” he said.

Both Sahil and Jyoti were earlier little disappointed as their wedding could not be arranged the way they had dreamed of.

“At the end of the day, we are together and safe, and that is more important. It took us only an hour to go through all ceremonies which, otherwise, could have taken days and the whole programme would be exhaustive,” said Sahil.

Jyoti said the best part of the day was their journey back home on a motorcycle. “On our way back home, ASI (Traffic) Ashok Kumar, along with other policemen, stopped us and greeted us with flowers. They appreciated us for keeping the marriage a simple ceremony,” said Jyoti.

Neelam, mother of Sahil, said as all parents wished for a grand wedding of their children, so did they. “But now that the marriage has been performed and we hardly spent anything on the arrangements, there is no stress induced by financial burden. We have decided that we will also marry our younger son in a simple way. We have invested the money, which we were supposed to spend on their marriage as planned earlier, in a fixed deposit in the couple’s name,” said Neelam.

Sahil’s parents said once the threat of Covid was over, they would plan a nice trip for the couple so that they could have some quality time together.