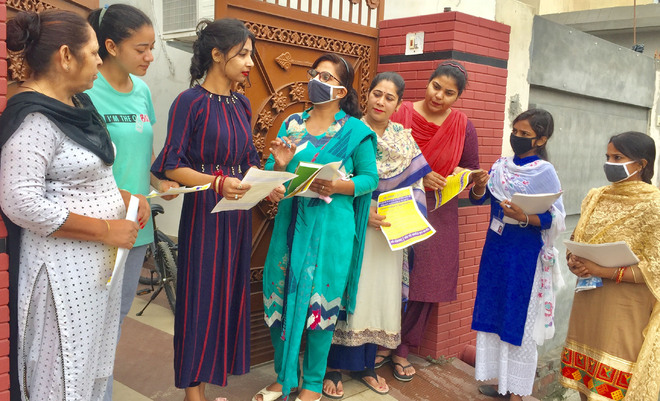 Councillors and volunteers encourage women to segregate waste before handing it over to garbage collectors in Mandi Ahmedgarh. Tribune photo

The Municipal Council (MC) launched a door-to-door campaign on Tuesday as part of the Swachh Bharat Mission, wherein women councillors of the town spread awareness about fundamentals of solid waste management at grassroots level.

Besides encouraging residents of their wards to segregate waste at the household level, the councillors are coordinating with officials of the Sanitation Department to facilitate distribution of organic manure being prepared with biodegradable litter collected from houses.

Municipal Council president Vikas Tandon said almost all women councillors had associated themselves with the awareness campaign, launched by the council for further upgrading cleanliness level in the town.

“Though volunteers of Punjab Infra Development Company have already been assisting the Sanitation Department staff in solid waste management, women councillors have now come forward to encourage residents to ease the job of sanitation workers by segregating waste at the household level,” Tandon said, maintaining that organic manure was distributed among desirous residents.

Ward Number 5 councillor Jaswinder Sharma said the initiative had encouraged residents to start segregation of litter regularly and develop kitchen gardens at their residences. “We are glad the residents of our ward are now segregating waste before handing it over to waste collectors and the MC is preparing compost manure from it,” said councillor Navjot Kaur.