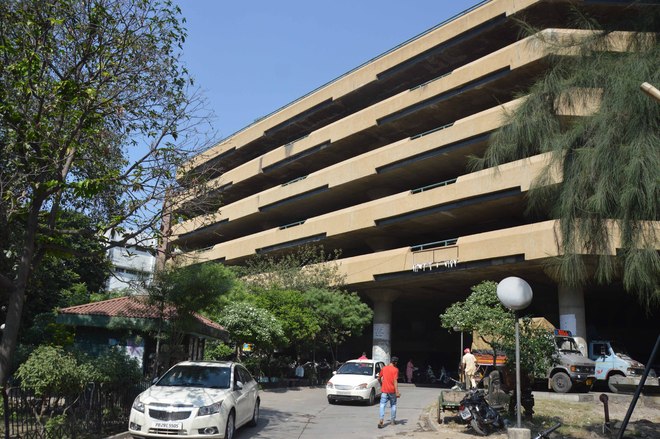 The fleecing of users of the MC’s multi-level parking lot that is located at a stone’s throw from the MC’s Zone A office near Mata Rani Chowk goes unabated.

The users are forced to pay Rs 50 for parking a car against the prescribed fee of Rs 20 at the parking lot as the officials concerned failed to check the violation being done by the contractor.

During the previous SAD-BJP regime and now during the Congress government in the state, overcharging at parking lots remained a major issue in the city.

The employees working under the private contractor were issuing manual slips to the users at the Multi-level parking lot on Thursday. As per the rules, the parking contractor is supposed to issue only e-tickets to the users, not manual tickets.

The contractor is also supposed to display parking fee rates on the prescribed board at the lot. But, no parking fee board was displayed at the entrance and exit of the parking lot. At the entrance of the parking lot, the categories of vehicles like small truck, tempo, car, jeep, scooter, motorcycle, etc, have been written on the pillars/walls but the fee column is left blank.

Angrez Singh of Tarn Taran Sahib had parked his car at the parking lot on Thursday. He said, “I had parked my car for 3-4 hours and I was charged Rs 50 as parking fee. But I don’t know the actual parking fee at all.”

Some other visitors also said Rs 50 were being charged for parking a car. A former councillor had earlier also raised questions over the MC ignoring the fleecing of users at the parking lot.

On being asked, the parking staff could not tell that where the parking fee board has been displayed? A parking worker, however, claimed that they are not overcharging fee from users.

MC Commissioner, Pardeep Kumar Sabharwal said the Additional Commissioner concerned has been directed to look into the matter and take strict action if any violation is found.