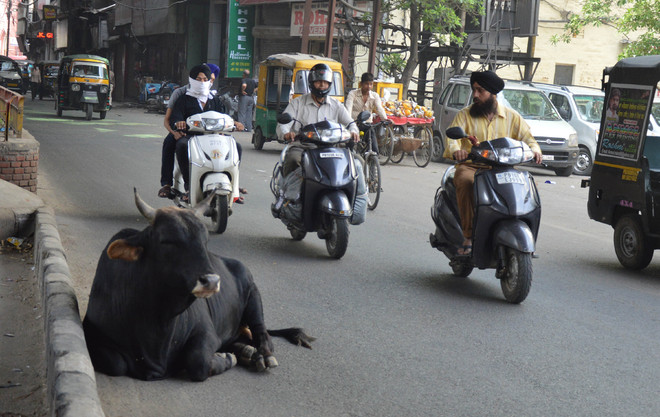 Stray cattle pose danger to commuters on roads in Ludhiana.

As the problem of the stray cattle has assumed alarming proportions in the district, especially in the industrial hub of the state and on the busy highways passing through Ludhiana, the Municipal Corporation (MC) has come up with a new cowshed in Samrala near here.

Opening the new shed at the government gaushala in Burj Powat village in the Samrala sub-division, Mayor Balkar Singh Sandhu and MC Commissioner Pardeep Kumar Sabharwal said the MC would shift 150 stray cattle from the city to the gaushala and would also bear the cost of the fodder, medical and other expenses incurred on them.

They said the MC had signed an MoU with the Dhyan Foundation, which was managing 35 gaushalas in the country, including three in Punjab.

They further said the foundation would ensure the proper care of the cattle in the gaushala.

Punjab Food, Civil Supplies and Consumer Affairs Minister Bharat Bhushan Ashu, who is the MLA, had instructed the MC to tackle the menace of the stray cattle efficiently, following which the MC decided to rope in an NGO for the purpose.

They said the civic body was serious towards the problem of the stray cattle in the district.

Stray cattle roaming around or camping freely on roads, including highways, pose a grave danger to the lives of travellers. Farmers suffer huge losses as stray cattle barge into their farms along the roads, eating and destroying the crops.

The seriousness of the problem can be gauged from the fact that several persons have lost their lives, while many have sustained serious injuries in mishaps due to stray cattle in the district.

Accusing the civic authorities of shutting their eyes to the growing menace of the stray cattle in the district, local residents have demanded immediate and concrete steps to solve the problem.