Meet me or Commissioner before taking any decision: Mayor 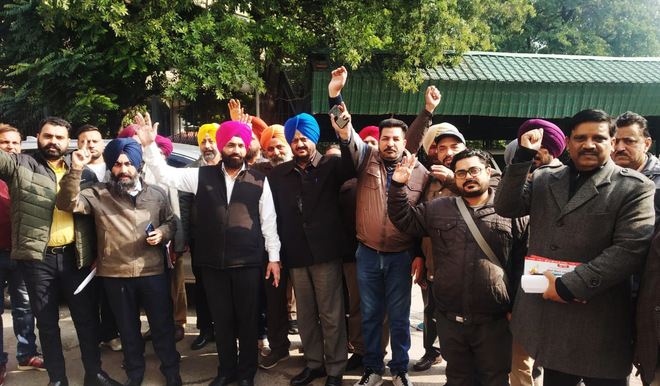 MC inspectors outside the MC's Zone A office in Ludhiana on Tuesday. Tribune photo

Around 50 inspectors and clerks, who deal with property tax collection, threatened to go on three-day mass leave from tomorrow to mark their protest as they claimed that they are overburdened.

The infuriated inspectors and clerks blamed a senior MC official for allegedly giving them extra work by fixing recovery targets. The employees claimed that they were also forced to do booth-level officer duty during elections after carrying out works related to the civic body.

A property tax inspector said they had been asked to collect recovery of water supply and sewerage charges from defaulters, along with the collection of property tax.

“We have been asked to collect recovery of water supply and sewerage charges from 100 defaulters daily. We have also been asked to collect property tax. Moreover, we are being asked to send our location from the field. We are also being forced to visit the properties of defaulters even during rain. After doing our job, we do election-related work as a booth-level officer. We are human beings, not machines,” said one of the inspectors.

The employees gathered at the MC’s Zone-A here today where they announced to go on mass leave to mark their protest. Mayor Balkar Singh Sandhu said: “These inspectors and clerks should meet me or the Commissioner before taking any decision to go on mass leave. If they meet me, I will look into the matter,” Sandhu said.

After the Mayor’s appeal, sources said, the inspectors and clerks might take further decision over their decision regarding the mass leave on Wednesday.

The MC Commissioner had given instructions to officials to not to fix meetings with staff in the morning. However, as per information, a number of employees were called for a meeting at Zone-A on Tuesday morning by a senior officer. Now, Sandhu said he would also instruct officials to not to call employees for meeting during public dealing time or in the morning. “Visitors face inconvenience when the staff concerned is not available in the offices. The officers should not call meeting with employees during the time fixed for public dealing,” he said.

Opposition to boycott Rajya Sabha till suspension of 8 members revoked:Azad