Ludhiana MC must recruit own staff for running parking lots in city, NGO writes to CM : The Tribune India

Ludhiana MC must recruit own staff for running parking lots in city, NGO writes to CM 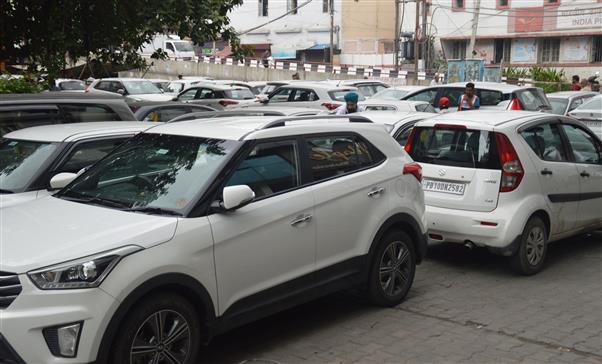 Despite “overcharging, exploitation of visitors and violation of norms” remaining a big issue at several parking lots operated by private firms (contractors) during the past nearly one decade, the Municipal Corporation is going to hold a fresh auction of parking lots but without blacklisting erring firms or contractors.

Now, a city-based NGO, Council of Engineers, wrote to Chief Minister Bhagwant Mann, demanding that the parking lots should be operated directly by the MC, Ludhiana, to generate employment and income. Notably, no concrete action was taken against firms or contractors that were earlier found violating the norms and fleecing visitors by charging more than parking rates fixed by the civic body.

Sharing concern over the issue of overcharging at parking lots, the NGO has demanded from the Chief Minister to order an investigation into the alleged “ongoing loot” by the contractors at the lots. The NGO sought that the lots should not be auctioned to contractors this time.

Ahead of the Assembly elections, AAP Ludhiana leaders had raised questions over the ‘parking mafia’ in the city but they also failed to provide any relief to the visitors at the lots. Kapil Arora of the Council of Engineers said: “The parking mafia is active for the past around one decade and despite being caught red-handed by MC officials and the public, it is still looting people by overcharging fees. The corporation has remained mum on the issue of overcharging most of the time. Fresh auction is to be conducted without blacklisting the erring contractors. The government should direct the civic body to recruit its own staff to run the lots”, he said.

A BJP leader, Amarjit Singh Tikka, said: “The overcharging fees is a major issue at various parking lots operated by private contractors. To eliminate the nexus, the AAP government should direct the corporation to recruit unemployed youth to handle the lots as the move would benefit visitors. Also, the civic body will generate a good income.” Meanwhile, the Feroze Gandhi Market Association has appreciated the MC’s decision to introduce hourly parking fee as members said it would help decongest the lots and increase revenue. On the other hand, the NGO expressed concern that the contractors would exploit citizens to make them pay more amount for parking even for a short duration, if an hourly parking system is introduced.

It is learnt that the MC opened technical bids on Monday while financial bids would be placed by qualified firms (contractors) for the auction of parking lots on Wednesday. But, MC officials have not disclosed how many firms have placed technical bids and how many have qualified for the next process of financial bids to be placed on Wednesday. However, MC’s senior officer of the tehbazari branch Tejinderpal Singh Panchhi did not respond to any phone call or text message.