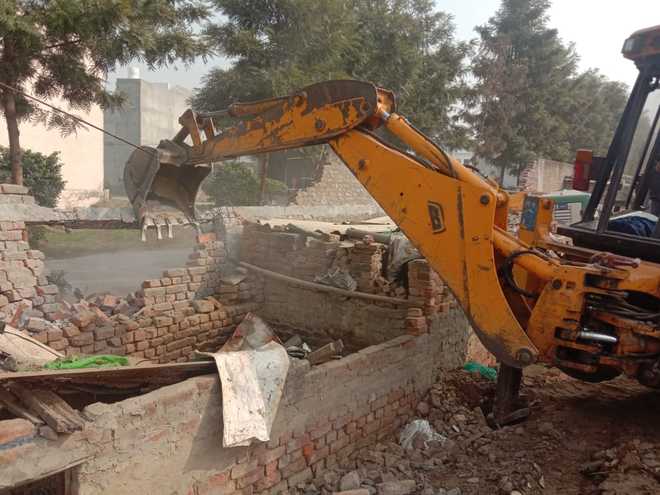 The demolition drive in progress near the Pavitar Nagar bridge in Ludhiana on Friday. Tribune photo

The Municipal Corporation (MC) removed over 100 temporary and permanent encroachments near the Pavitar Nagar bridge over Buddha Nullah here on Friday.

The demolition drive was conducted in the presence of the police.

According to information, the encroachments were removed for building a leisure valley and a road. It is learnt that the MC had also planned to remove some remaining encroachments for these projects on Monday.

The MC’s Zone D assistant town planner (ATP) Madanjeet Singh Bedi said there were a number of slums, houses and other constructions on the encroached land. He said the violations were marked with red colour some days ago before the drive.

It is learnt that a number of persons were also living in some slums or permanent constructions. Some people were also rearing pigs on a piece of the encroached land as per information. “There were some houses and slums too on the encroached land. We have got the land vacated,” Bedi said.

MC’s Municipal Town Planner SS Bindra said the remaining encroachments would be removed on Monday and Tuesday. Mayor Balkar Singh Sandhu said the encroachments were removed for building the Leisure valley and a road. He said he, along with cabinet minister Bharat Bhushan Ashu and MC Commissioner Pardeep Kumar Sabharwal, had visited the area around 15 days ago.