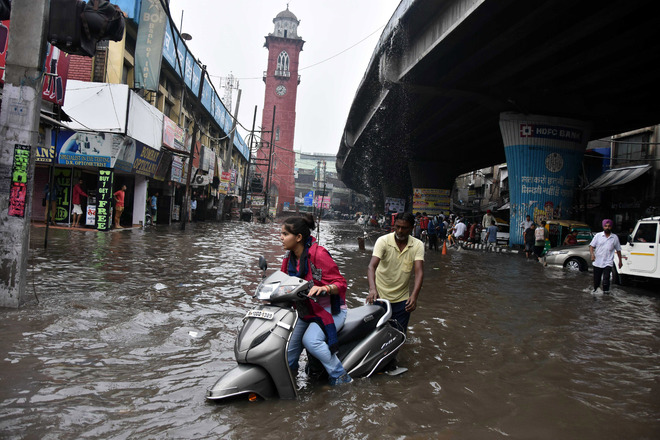 Water accumulated on a road after rain near Clock Tower in Ludhiana. file

Finally, the Municipal Corporation (MC) is going to install storm sewer system to address over a decade old waterlogging problem near the iconic Clock Tower in the city.

Whenever it rains heavily, commuters as well as shopkeepers have to wade through knee deep water accumulated at this prominent location on the Old GT Road in the city.

Notably, the Finance and Contract Committee of the MC has given its nod for installation of the storm sewer system on a stretch near Clock Tower. The storm sewer line is supposed to be connected with an old drain passing through near Bhadaur House Market.

As per the information, an old sewer line (to drain out rainwater) had earlier got damaged when pillars of the Elevated Road were constructed on the Old GT Road. Shopkeepers of markets near Clock Tower had been complaining about massive waterlogging, especially during the rainy season, for a long time.

According to some shopkeepers, since the Elevated Road was constructed, waterlogging became a serious problem at Guru Teg Bahadur Sahib Market and Old GT Road stretch near the Clock Tower. Many times, rainwater entered shops in the area. Major waterlogging was witnessed in this area during rainy season this year leaving people to suffer.

The councillors of the ward concerned have taken up the waterlogging issue with the MC authorities multiple times. The MC executive engineer, Pardeep Saluja, said, “Tenders have been floated for the project. The work to install the storm sewer system near Clock Tower will be completed before the arrival of rainy season next year.”

“The rainwater will get drain through the storm sewer line, which will be connected with a drain passing near Bhadaur House Market. Once the storm sewer line is installed, there will be no waterlogging near the Clock Tower area. The estimated cost of the project is around Rs35 lakh,” he added.