Once work is started, reconstruction design will be finalised: MC official 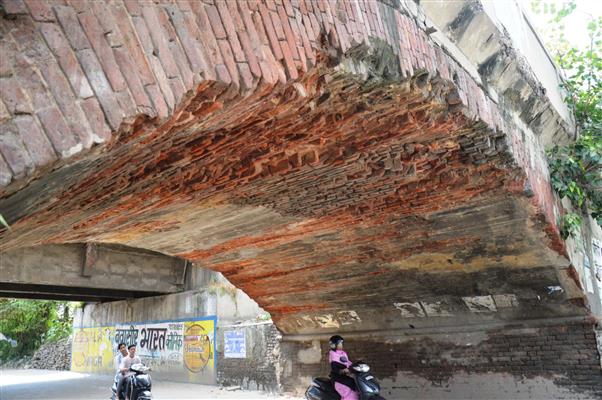 The bridge over the Buddha Nullah in a dilapidated condition. Inderjeet Verma

Though the design for its reconstruction is yet to be finalised, the Municipal Corporation, Ludhiana, is going to get a century-old unsafe bridge, over the Buddha Nullah on Old GT Road, near Chand Cinema, here dismantled soon. The civic body will spend around Rs 1 crore on dismantling the bridge, which is said to be over 100 years old.

Tenders have already been floated for dismantling the bridge while the work order for the same is expected to be issued soon to the contractor concerned. The bridge was declared unsafe around 11 years ago but the civic body failed to get it reconstructed till date.

Notably, the civic body had earlier floated tenders eight times during the past one year for the reconstruction of the bridge at an estimated cost of Rs 5.84 crore but the tendering process had remained unsuccessful at all times. Later, the MC decided to get the bridge reconstruction project redesigned by Guru Nanak Dev Engineering College (GNDEC).

Superintending Engineer of MC’s B&R Branch Teerath Bansal said as of now, the tender was floated for only dismantling the bridge. “After fulfilling the required procedure, the work would be allotted to the successful contractor for dismantling the bridge. Once the work is started, we would get an idea about the bed level in the nullah and the foundation of the old bridge. After getting to know about the old bridge foundation, the design for reconstruction of the bridge would be then finalised and tenders would be floated for the same soon.”

Bansal said as per the original estimate for the bridge reconstruction project, Rs 5 crore was estimated for the reconstruction work and Rs 1 crore for dismantling the bridge. The civic body would also be able to generate Rs 15-20 lakh from the dismantled material.

Bricks were falling off different parts of the bridge, posing threat to commuters. The bridge safety walls were also in a dilapidated condition. As a result, the bridge was closed for the movement of all kinds of vehicles, except two-wheelers, in January 2021 when a wall was constructed to stop the entry of cars, auto-rickshaws and other big vehicles. In 2018, the entry of heavy vehicles was stopped on the bridge.