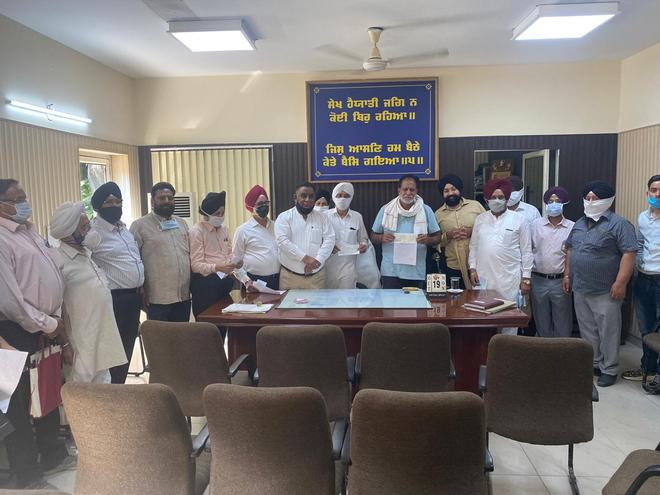 Mayor Balkar Singh Sandhu thanks shopkeepers for depositing the CLU fee to the MC. Tribune photo

The issue of change of land use charges (CLU) charges amid the pandemic has become a bone of contention between the Municipal Corporation (MC) and shopkeepers. While Mayor Balkar Singh Sandhu has been appealing to traders to avail MC’s change of land use (CLU) scheme, Congress councillor-cum-chairman of Punjab State Industries and Exports Corporation (PSIEC), Gurpreet Gogi has opposed the move of issuing notices to shopkeepers for paying CLU charges.

After the MC sealed some shops at Ghumar Mandi for not depositing the CLU fee, Gogi met the MC Commissioner on Monday. He said, “The government had issued a notification in 1995 providing Rs25.32 per sq ft to be collected as CLU fee. But, the MC had never sent any notice to shopkeepers to pay the charges as per the notification. Now, the MC has served notices to shopkeepers to pay around Rs5,600 per sq ft as CLU charges. It is a wrong step taken by MC.”

Gogi, who was accompanied by some shopkeepers, said, “If the MC really wants to charge the CLU fee from shopkeepers whose buildings were constructed before 2006, it should do as per the notification of 1995, .”

Meanwhile, Mayor Balkar Singh Sandhu said the MC was charging the fee from shopkeepers as per the rules. He said the fee was getting increased every year.

Sandhu said the MC had launched the scheme to provide a big relief to shopkeepers, industrialists and owners of institutions so that they can deposit fee at the MC office. The amount will be spent on the development of the city, he said.

The Mayor said the shopkeepers protested against the scheme in the beginning as they did not understand it. But, now when they learned about it, they are themselves visiting the MC offices to deposit the fee for regularisation or obtaining CLU certificate, he said.

He thanked the shopkeepers of Ghumar Mandi and Jawahar Nagar Camp, who have taken advantage of the scheme and started depositing the CLU fee in installments due to the pandemic.