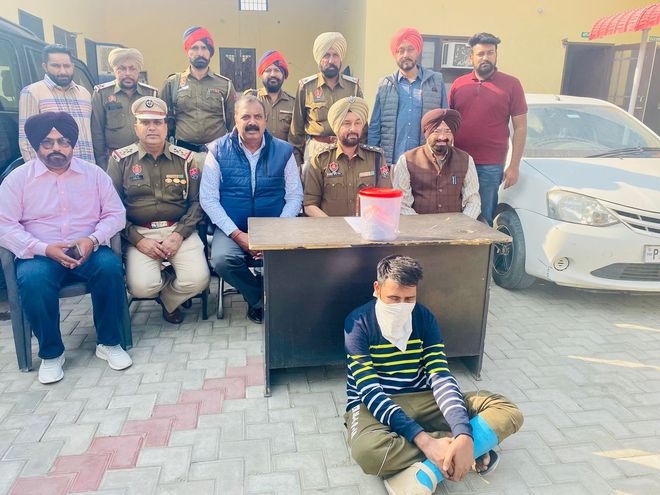 The accused in police custody in Jagraon. Tribune photo

The CIA wing of the Ludhiana (rural) police claimed to have arrested the kingpin of a notorious gang of drug peddlers and seized 500 gm of heroin worth crores in the international market from him.

The police have registered an FIR under Sections 21, 25, 61 and 85 at the Sidhwan police station against the accused, Mandeep Singh, alias Bitti, of Abbupura village and his accomplice Pankaj Mallan, alias Sunny, of Sidhwan Bet village and initiated a probe to identify other members of the gang.

Senior Superintendent of Police (SSP), Ludhiana (Rural), Rajbachan Singh Sandhu, said police personnel, under the supervision of SP (D) Balwinder Singh, had busted an interstate gang that had been supplying drugs and narcotics in the region at a large scale.

The SSP said a police party, led by SI Janak Raj, had intercepted, Mandeep on the basis of a tip-off when he was traveling in his car (bearing registration no. PB 13 BG 9977) and 500 gm of heroin was recovered during search form the vehicle in the presence of Jagraon DSP Daljit Singh Khakh. Mandeep had been involved in illegal activities for more than 20 years.

The accused informed the police that one of his accomplice Pankaj Mallan, a taxi operator, used to bring consignments of drugs and narcotics from other states and Delhi in his vehicles. He (Pankaj) had gone to deliver another consignment to his clients.

The police are expecting more recoveries after his arrest. Probe revealed that Mandeep was already booked in at least eight criminal cases registered at the Sidhwan Bet and Sadar Jagraon police stations.