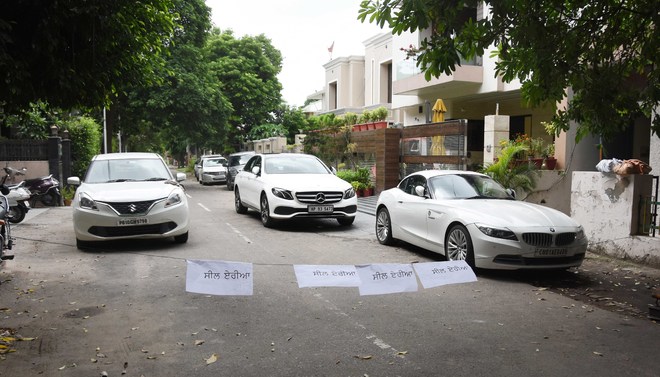 Only a rope carrying the message, “sealed area”, has been tied at the micro-containment zone in Rajguru Nagar, Ludhiana. Photo: Ashwani Dhiman

Covid cases have already crossed 5,000 mark in the Ludhiana district. Twenty micro-containment zones have been declared to keep a check on rising coronavirus cases. Yesterday, four new micro-containment zones were declared after more than five cases were reported in these areas. Declaring the area a micro- containment zone means it is immediately sealed, the mobility of the people is curtailed and only essential services are allowed.

Yesterday, Sham Singh Road from Bhuriwala Mandir to Jain Mandir was declared micro-containment zone after six cases were reported from the area. A visit in the late evening revealed that there was no barricading, no cop was present and residents were not aware of any cases in the area. Even today, no barricades were erected and no cop was deployed in the area till 2 pm. According to the protocol, the area has to be sealed as soon as it is declared micro-containment zone.

A few kids were seen roaming freely without masks near Bhuriwala Mandir. These kids were preparing and collecting stuff for Janmashtami and cared a little about their safety. Residents of the area came out for their daily walk around the colony.

When one of the residents near Jain Mandir was approached to know if he was aware of the area being declared micro-containment zone, he was taken aback on hearing the information.

“We heard that a few people tested positive. We are not aware about their location. Even stickers about home quarantine have not been pasted outside their houses. Either they don’t allow pasting of stickers or they tear these after officials leave. There is no barricading or cop on duty in the area. We came to know from you that this area has been declared micro-containment zone,” the resident said.

In Rajguru Nagar, a lane on backside of Pink Flats was declared micro-containment zone on August 7 after seven cases were reported in the area. A visit to the area in the late evening yesterday and then today morning at 11 am revealed only a rope with ‘sealed area’ written on a plain paper stuck with it barred entry/exit to the lane.

No cop was on duty neither during the night nor in the morning at Rajguru Nagar. People were easily passing through the lane on their two-wheelers and cars from under the rope.

One of the area residents said they came to know that a few people tested positive and also saw the health team coming here, but after that everything was normal. “The rope to prohibit the entry and exit of people is just any eyewash. Nobody is there to stop entry/exit of the people. They take their vehicles outside from under the rope,” said a nearby area resident.

Despite repeated attempts and dropping a message about the issue Police Commissioner Rakesh Agrawal could not be reached for his comments.

What the Civil Surgeon says

“As soon as an area is declared mini-containment zone, no movement is allowed. The administration is informed and the Deputy Commissioner further passes information to the Police Commissioner, who has to ensure proper barricading and deployment of cops in the area. There should be 24x7 police presence in the area. Only essential services are allowed in the area. A door-to-door survey and sampling is done by the Health Department,” Dr Rajesh Bagga.