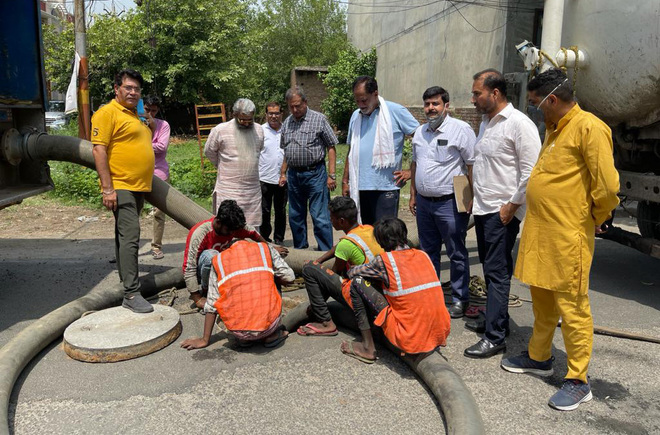 Punjab Food, Civil Supplies and Consumer Affairs Minister Bharat Bhushan Ashu oversaw the removal of encroachments on the seasonal rain drain near Panj Peer Road in Ward Number 78 today. With this, the water logging problems of the main Panj Peer Road and some 15 localities in the vicinity would get solved.

Accompanied by Mayor Balkar Singh Sandhu and senior MC officials, Ashu also inspected the cleaning of the main sewer lines in Maharishi Valmiki Nagar, to be carried out at a total cost of Rs 59 lakh.

The minister said due to encroachments by some dairy owners on the seasonal drain, rainwater was not able to end up in the Budha Nullah, resulting in water logging on Panj Peer Road and in surrounding localities. “Now, encroachments have been removed with the efforts of officials from MC as well as the Irrigation and Drainage departments,” he said.