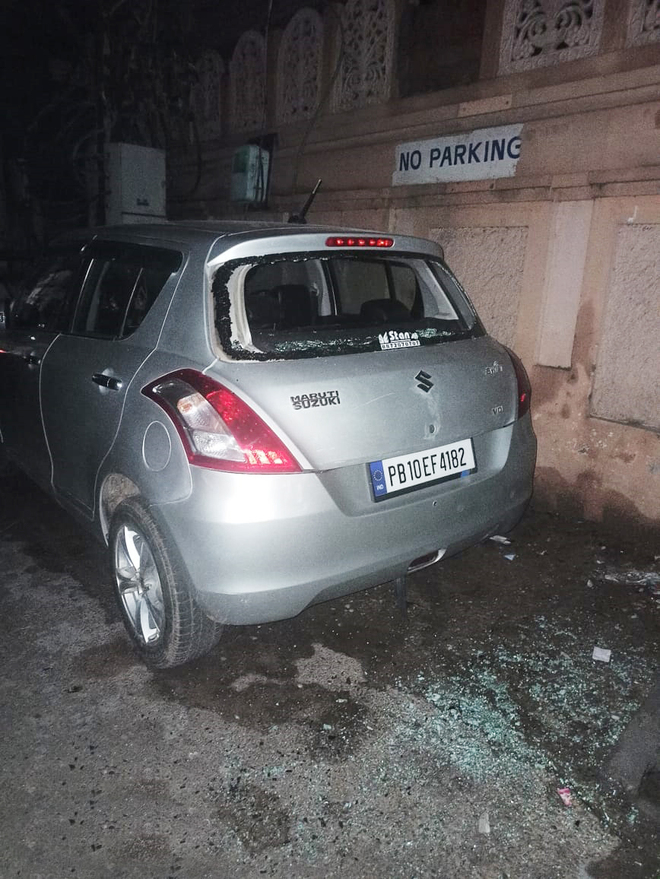 One of the cars damaged by miscreants in the old city area of Ludhiana on Wednesday night. Tribune photo

Several vehicles were damaged by some unknown miscreants near the police Division No. 3 and Sangla Wala Shivala in the old city area yesterday night. On receiving complaint, the police immediately reached the spot and started an investigation.

Talking to mediapersons, Smile Nanda, a resident of Gulchaman Gali, said yesterday night at around 10.15 pm several persons on two-wheelers barged into streets and damaged cars with swords, sharp weapons, baseball bats and bricks. Miscreants randomly damaged cars parked on the road, he added. Windowpanes of most cars were smashed while some vehicles suffered more damage, he said.

Another resident Gopal said miscreants came on motorcycles and cars and damaged cars parked near the police Division No. 3. They continued to wreck havoc till Sangla Wala Shivala, he added.

After residents of the area came out of their houses, miscreants fled from the spot.

ADCP-1 Deepak Pareek said complaint about some persons damaging cars was received last night. The footage of CCTV cameras in the area was being checked to identify suspects, the ADCP-1 added.

“We have launched probe to find reason behind the incident. Soon, suspects will be in the police net. We are close to solving the case,” the said ADCP-1 said.

Sources said the police suspect that miscreants, who damaged cars, could have enmity with some residents of the area.