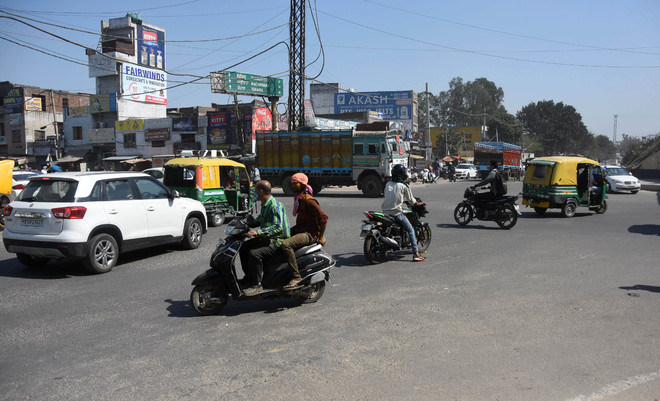 There is a need to check overspeeding at Sahnewal Chowk in Ludhiana. Photo: Ashwani Dhiman

Sahnewal Chowk, which was declared a black spot in the past, on the National Highway-44 needs urgent attention of the authorities.

The spot is prone to road mishaps and no steps were taken to curb accidents at the point. Twentytwo persons lost their lives at the point in three years (2016, 2017 and 2018) by getting hit by speeding vehicles. Most of the victims were pedestrians, cyclists or two-wheeler riders riders. During the visit to the spot, it was observed that the main market of Sahnewal is located near the chowk and there is no traffic light junction at the point.

The chowk gets traffic from all directions due to which the point is more prone to road mishaps.There are no speed breakers on the road. Even blinkers are also missing on link roads. The service lane alongside the road is not built in a proper way as there are several unauthorised cuts. Fences alongside the road are also damaged at several spots near the chowk. There are no zebra crossing markings and luminous signboards at the spot. Signboards displaying speed limits are also not available.

The authorities are not able to keep a check on overspeeding at the point as only one speed radar is available with the Traffic Police, Ludhiana.

Residents of the area alleged that shopkeepers and workshop owners had encroached upon the service lane as they park their vehicles and keep their items on the service lane outside their shops. The width of the historical gate, built in the name of Guru Gobind Singh, at the chowk is less for easy movement of traffic, leading to traffic jams. Heavy vehicles such as tractor-trailers get stuck while crossing the gate due to which a portion of the gate has also got damaged. Even there is no bus stop at the chowk due to which people stand at various points to board buses and sometimes get hit by speeding vehicles. Many times, buses halt on the road, creating hurdles for commuters.

Dr Kamal Soi, member, National Road Safety Council, Ministry of Road Transport and Highways, Government of India said: “This black spot is located on the service road which joins crossroads under the underpass on the Sahnewal gate. Heavy vehicular traffic comes from the Dehlon side and move towards the Chandigarh road and national highway towards Delhi and Ludhiana. Hence, the point is a dangerous one. There is a dire need to check overspeeding by installing rumble strips or speed breakers.”