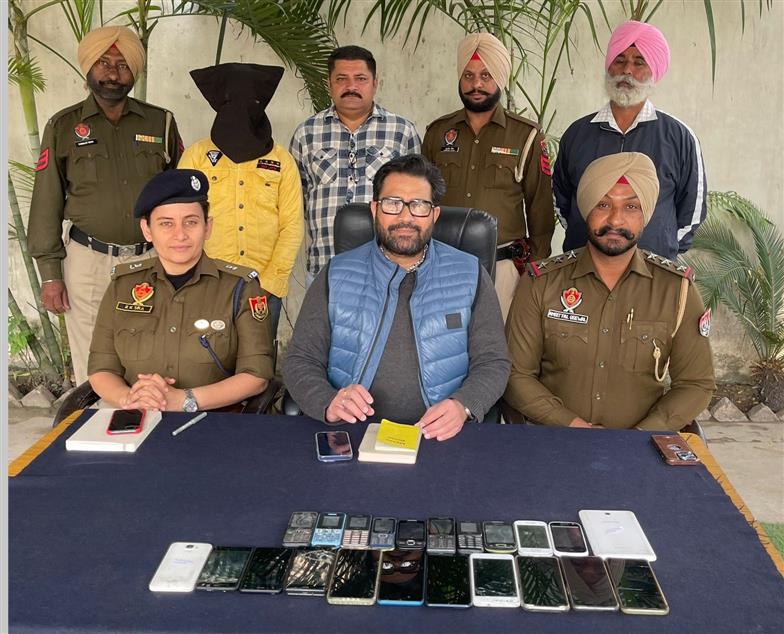 The suspect in police custody in Ludhiana on Saturday. Tribune photo

The anti-narcotics cell-2 of the Ludhiana police today nabbed a mobile repair shop owner and recovered 22 mobile phones from his possession. The suspect had bought the cell phones from snatchers and thieves at throwaway prices.

A case under Section 411 of the IPC was registered against the suspect, identified as Prince Kumar Tota of Hargobindpura mohalla. DCP (Investigation) Varinder Singh Brar, ADCP (Investigation) Rupinder Kaur Sran and in-charge, anti-narcotics cell, inspector Amritpal Singh issued a statement in this regard.

Officials said the police got information that Tota was buying looted and stolen mobile phones from thieves and snatchers and he was on the way to sell the same to his clients.

Accordingly, the police laid a naka at the Sufian chowk and cornered the suspect. During checking of his belongings, 22 mobile phones of various brands were recovered. During preliminary questioning, the suspect confessed that he was doing mobile repair work at his home for the past over four years. Many unknown people used to sell him stolen and looted phones.

After repairing the phones, he used to sell them to migrant labourers.

The arrest of Tota might solve several theft and snatching cases in the city, the police said.

Brar warned the public to refrain from buying any stolen property as it might land them behind the bars. Instead, the residents should inform the police if they found any person involved in such acts.