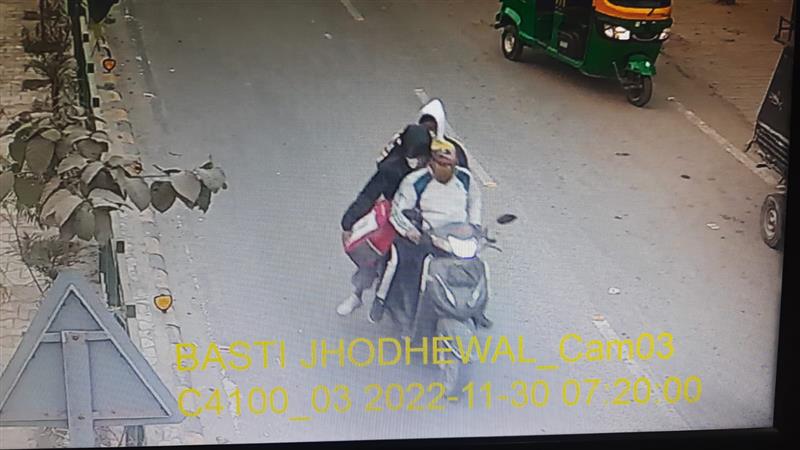 CCTV grabs of some of the suspects who looted the money changer at Sekhewal in Ludhiana.

Around six robbers carrying sharp weapons looted a money changer at Sekhewal, in the jurisdiction of the Daresi police station, on Wednesday morning.

The miscreants snatched a bag containing Rs 2 lakh in cash and 10 mobile phones. Panic had spread in the area after the incident as the suspects committed the loot in the presence of other shopkeepers.

Timmy, owner of Balram Telcom, said around 7.20 am today when he opened the shutter of his shop, six- seven persons carrying sharp weapons suddenly stopped their two-wheelers in front of his shop and attacked him.

“When I was trying to save myself from the robbers, their other aides snatched a bag containing cash and phones from me and fled. Those miscreants who attacked me also managed to flee the spot. All robbers were wearing mask and it could be possible that they were aware about my routine of opening the shop,” the complainant alleged.

The shop owner said CCTV cameras had also captured the incident and the footage was handed over to the police for investigation.

After the incident, ADCP-1 Rupinder Kaur Sran had reached the spot and started a probe.

She said robbers were captured in CCTV cameras and a probe was being conducted to identify them. The ownership details of vehicles used by robbers were also being obtained to get any clue about the suspects.

After the incident, shopkeepers of the area expressed concern about their safety. They alleged that the robbers had targeted the victim in the daytime that too without the fear of being caught.

They demanded that the police should intensify patrolling in the area to prevent any such incident in future.

After the incident, shopkeepers of the area expressed concern about their safety. They demanded that the police should intensify patrolling in the area to prevent any such incident in future.