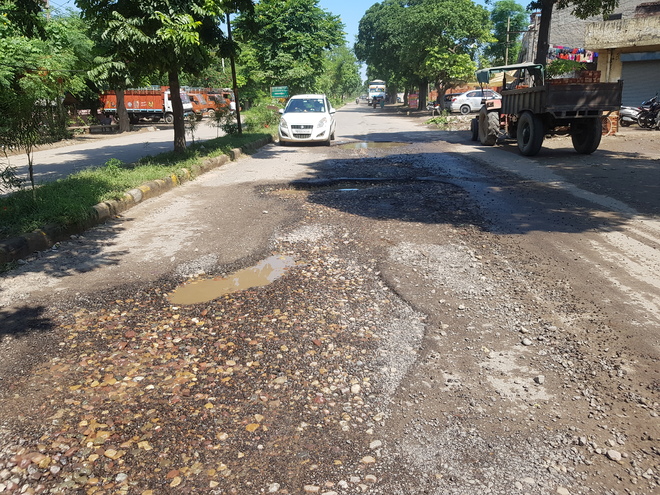 The Jeevan Nagar road, which was recarpeted months ago, in a dilapidated state. Inderjeet Verma

Months after recarpeting work, the Jeevan Nagar road (Which connects Chandigarh Road with Industrial Area) has damaged at different points in Ludhiana, raising eyebrows. Thousands of commuters have been facing inconvenience while passing through the stretch daily.

Shopkeepers on the road said the road was recarpeted around 10 months ago by spending a huge amount of money and it had started getting damaged within days after the road work was completed. Now, big potholes have appeared at various points on the stretch, giving invitation to mishaps.

Notably, residents and shopkeepers were forced to stage multiple protests as the dilapidated Jeevan Nagar road was earlier ignored for four years. Following the protests and repeated demands, the road recarpeting work was then carried out by the Ludhiana Improvement Trust.

A businessman, Naresh Kumar, said, “When the road was being recarpeted, a small pothole had appeared near some shops but it was ignored at that time by the department concerned. Now, the commuters are forced to suffer due to big potholes on the stretch.” A shopkeeper said, “We suffer a lot due to poor condition of the road from different sites. No steps have been taken to repair the damaged road that was recarpeted just months ago. We want samples of the road material must be collected for testing to know the reason as to why the road has started getting damaged within a short period.”

“Public money should not go waste by carrying out such poor road works. The responsibility of officials must be fixed and transparency be ensured,” he added.

Naveen Kumar, Ludhiana Improvement Trust, executive engineer, said: “It has come to our notice that a 15-ft-long portion has been damaged on the road. The contractor concerned has been asked to ensure repair of the damaged portion on the road within 15 days.”

LIT SDO Jaswinder Singh said the work was conducted in the winter season due to which potholes appeared at one or two sites and the damaged portion would be repaired at the earliest.