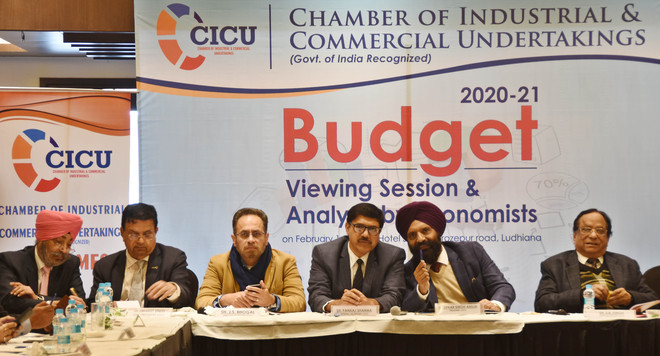 People from varied fields such as industry, agriculture and health have said the Finance Minister has missed yet another opportunity to revive the struggling economy of the country. The All-Industries and Trade Forum (AITF) has said the Budget will result in further unemployment and recession.

Tax Audit Limit NOT hiked FOR ALL ASSESSEES

“The overall budget of the MSME Ministry has been merely enhanced from Rs 7,011 crore to Rs 7,572 crore but this increase is mainly in the schemes for village and cottage industries. On the other hand, to please voters, the budget of agriculture has been increased from Rs 46,076 crore to Rs 1,34,399 crore in the past two years, which is a step-motherly treatment with industry,” said Badish Jindal, national president of AITF.

A Live Budget meet was today organised to discuss the outcome of the Annual Budget 2020-21 by the Chamber of Industrial and Commercial Undertaking (CICU) where members of the business community discussed the impact of the budget on the MSMEs.

Upkar Singh Ahuja, president, Chamber of Industrial and Commercial Undertakings (CICU), said there was a huge relief to the common man throughout this Budget but some incentives for the MSMEs. The industry was expecting much more.

A boost to business

Pankaj Sharma, CICU general secretary, said there was a relief for the industry as well as for individuals. The Budget has Rs 27,300 crore for industry promotion and for giving a boost to business.

Ashok Kumar Juneja, vice-president of CICU, said changes in the I-T slabs and rates was a welcome step, but in case deductions were not given, it would hit investments in the LIC, NSC, PPF and other government securities.

The Apparel Export Promotion Council has congratulated the Finance Minister for effectively addressing some of the key issues facing the sector, especially in the areas of Ease of Doing Business.

“The new NIRVIK scheme for higher export credit disbursements with greater coverage, reduced premium and simplified procedures for claiming settlements is a welcome step given the increased uncertainties in the global market. We look forward to further details of the scheme,” said Dr A Sakthivel, chairman of AEPC.

Nothing solid announced for architecture sector

Architects from the Indian Institute of Architects Punjab Chapter (IIA-PC) are unhappy with the Budget as nothing solid has been announced for architecture or town planning/Smart Cities except for addition of five more Smart Cities via the PPP mode.

“We hope Punjab will get a deserving share as the government wants to improve the life of people through infrastructure pipeline projects worth Rs 100 lakh crore. As far as the whole country is concerned, Rs 1.7 lakh crore allocated to transportation will bring relief to all Indians. With 100 more airports to be developed by 2024 to support the UDAN scheme, we hope that Ludhiana Airport will be operational in coming years at Halwara,” said Sanjay Goel, chairman of Indian Institute of Architects.

No special package for MSMEs

Gurmeet Singh Kular, president of Federation of Industrial and Commercial Organisations (FICO), said: “No special package for the MSME sector has been announced, which is the backbone of the Indian economy. Rather in this period of recession, some special schemes should have been introduced to encourage the MSME sector”.

One-district-one-product can be a game-changer

President of Federation of Indian Export Organisations (FIEO) Sharad Kumar Saraf said the one-district-one-product can be a game-changer for exports.

The Tribune correspondent Manav Mander talks to a cross section of society about the Union Budget, and here is what they have to say...

Many big slogans have been raised for MSMEs, but the fact is that the budget of the PM Employment Guarantee Programme has been reduced to Rs2,800 cr from Rs3,369 cr. The overall budget of the MSME Ministry has been merely enhanced from Rs7,011 cr to Rs7,572 cr, but this hike is mainly for cottage industries. — Badish Jindal, chief of Federation of Punjab Small Industries Association

The government’s target of eliminating TB from the country by 2025 is challenging but can be achieved if proper surveys are carried out for the implementation of the plan. The private sector needs to extend a helping hand as it is generally the private hospitals which fail to notify the cases. — Dr Ashish Chawla, District TB Officer

A holistic budget that caters to all segments

It is a holistic budget which caters to all segments of the economy, primarily education, health and women welfare, infrastructure and agriculture. What is heartening to see is that the government has put a lot of emphasis on boosting the tourism sector. — Sonica Malhotra Kandhari, Joint MD of MBD Group

Promise to up farmers’ income by 2022 an illusion

The promise to increase farmers’ income by 2022 is just an illusion. Two years back also the same promise was made by the government, but nothing has been done to fulfil it. No agriculture policy has been formulated. — Harinder Singh Lakhowal, general secretary, BKU Punjab

Nothing for a common person

The need of the hour is to make the necessary things such as vegetables, pulses, oil and cooking gas affordable. It has become really difficult to make ends meet amid so much of inflation. I don’t think there is anything announced for a common person like me. — Meena, homemaker

New education policy will be announced soon, and nothing else has been announced for the education sector at the school level. ‘Study in India’ is a good initiative but it should be executed in a spirited way. — Jangpal Singh, school teacher