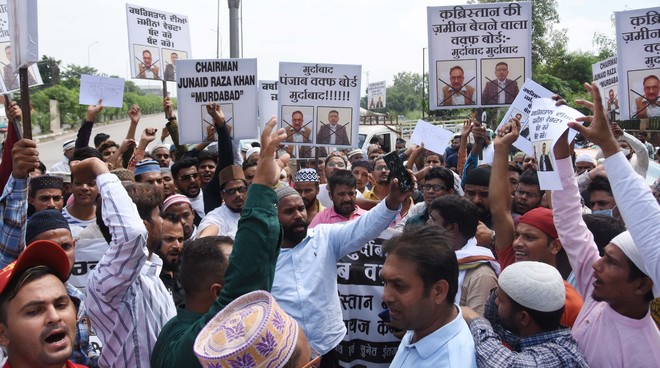 Protesters raise slogans against the Punjab Wakf Board for not removing encroachment from cemetry land. Himanshu Mahajan

Members of the Muslim community staged a protest against the Wakf Board authorities near Old Courts Chowk on Monday, accusing them of failing to get alleged encroachment removed from the land of a cemetery at Baddowal here.

Members of the Muslim Kabristan Baddowal and Sunet Intzamia Committee raised slogans against the board over the issue. Chairman of the committee Anwar Ali alleged that there was a cemetery at Baddowal for the Muslim community but a part of the cemetery land had been allotted for the construction of a factory in an “unauthorised” manner.

Anwar Ali said they had raised the matter before the board authorities but they failed to take any action in this regard.

“We demand that the cemetery land should not be misused for any other purpose. If our voice is not heard, we would be forced to intensify the agitation. We will also gherao the residence of the CM,” he said.

Committee president Imran Khan alleged that the Wakf Board authorities had left only a small piece of land for the cemetery and the rest of the land had been allotted for a factory by breaking rules.

“We want that the entire land should be used for the cemetery. Earlier too, encroachments were raised on the land as a colony was developed there. In the records of the Revenue Department, the site has been marked as the cemetery land. Now, work for the construction of a factory building is underway on the land. Thus, we were forced to hold a protest today.”

Another member Shaukat Ali said: “The land has been used as a cemetery since before 1947.”