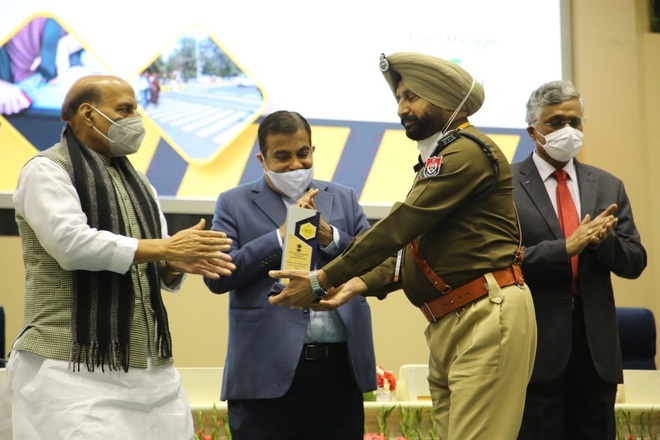 The Assistant Commissioner of Police (ACP), Traffic, of the Ludhiana Commissionerate, Gurdev Singh, was yesterday awarded the National Road Safety award for taking several initiatives for road safety in the industrial hub in the city.

He received the award at Vigyan Bhavan in New Delhi. It was given to him by Rajnath Singh, Defence Minister, and Nitin Gadkari, Minister of Road Transport and Highways.

His work pertaining to traffic management and road safety was appreciated by the Union government. Gurdev credited his parents and senior officials for the honour.

In one of his initiatives, Gurdev had penned down a book, “Top Ten Black Spots”. The ACP thoroughly investigated these black spots falling in the Ludhiana Commissionerate and is making efforts to rectify the same to prevent accidents at these points.

As per the ACP’s study, most of the victims in these accidents include pedestrians and cyclists working as labourers in factories.

The ACP has also received Police Medal for Meritorious Services and Chief Minister’s Medal for Outstanding Devotion to Duty for his services in managing the city’s traffic. During the pandemic, the ACP served food to the needy in the lockdown and ensured proper implementation of the Covid-19 guidelines.