Need to spread awareness among homeless 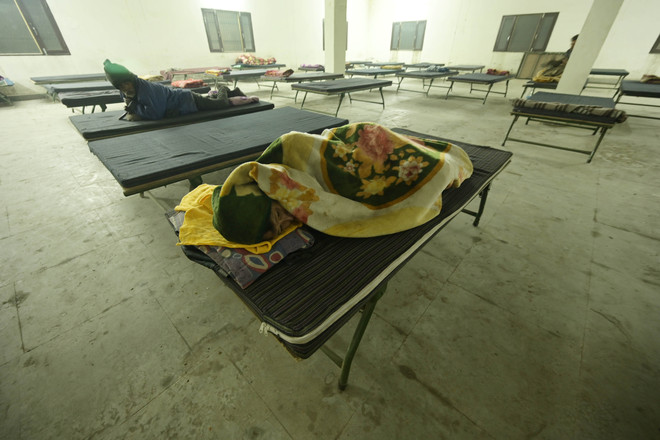 The night shelter at Ghoda Colony in Ludhiana. Himanshu Mahajan

The night shelter of the Municipal Corporation (MC) at Ghoda Colony near Cheema Chowk generally remains about 75 per cent vacant these days.

Meanwhile, many homeless can be seen sleeping on roadsides or under the flyovers in the city.

Amid the cold wave, just 20-30 persons visit this shelter these days. The officials claimed that there was arrangement for 130 persons in two big halls of the night shelter.

Like other nights shelters, there is no provision of washing or cleaning of used blankets and bedding covers at Ghoda Colony night shelter. There is also no provision of food or tea for needy persons. A water purifier for drinking water is required to be installed at the shelter.

Councillor from ward No. 20, Navneet Singh, said, “I will raise the demand for the installation of direction boards at different locations like Cheema Chowk and other areas to indicate the way leading to the night shelter. However, many residents of Ghoda Colony are aware about the night shelter.”

For the prevention of coronavirus, masks and sanitisers were earlier unavailable at the night shelter. But, an official said that these had been made available two days ago.

MC SDO Arvind Aggarwal said there were two halls, one each for men and women.

Superintending Engineer (B&R) at MC’s Zone B, Parveen Singla, said they make all efforts to bring the homeless persons to the night shelter.

MC SDO Arvind Aggarwal said a city bus had been deployed to bring the homeless from different locations. We motivate the homeless to visit the night shelter. Potable water is supplied at the shelter. We had earlier got the blankets washed. Superintending Engineer Parveen Singla said they would also take measures to display direction boards regarding the night shelter.