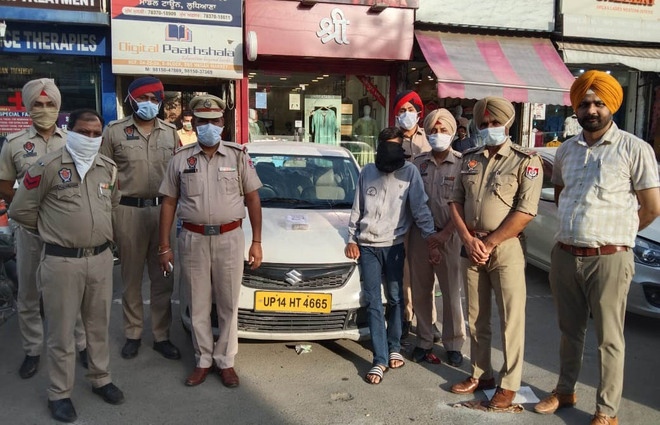 The accused in police custody in Ludhiana on Wednesday.

The police have claimed to have solved an incident of robbery occurred at the residence of Municipal Corporation Superintendent Avinash Sharma in the Model Town locality here. The robbery was allegedly committed by a temporary domestic servant, along with his two accomplices, on April 10. One of the four accused, Sanjay Kumar, a native of Nepal, was arrested from Ghaziabad in Uttar Pradesh on April 11.

The police said a Swift Ola Cab (bearing registration no. UP 14HT 4665) was used for committing the crime and Rs 98,000 in cash looted by the gang were recovered from the accused who was produced in a local court which granted a two-day police custody for further interrogation.

SHO Model Town Inderjit Singh said the MC official had employed Mohan Kumar, a native of Nepal as a domestic help around three months ago. As Mohan had to go home to visit his family, he arranged another person, Rajesh Bahadur Dhami, as his replacement about two weeks ago.

During preliminary interrogation, Sanjay told the police that Rajesh had told them about cash, jewellery and other valuables in the house following which the robbery plan was hatched.

The accused had reportedly told the police that one of the three accused kept sitting with the MC official so that she could not raise any alarm while two others searched for cash and valuables. As per complaint lodged with police, the accused had taken away cash around Rs 5-6 lakh, around 80 gm gold jewellery, two diamond bracelets and two diamond sets and a case under Sections 394/34, IPC, was registered against them.

The police said teams had been sent to different places to nab the prime accused, Rajesh Bahadur, said to be a resident of Vasai in Palghar district of Maharashtra, and his accomplice. — OC