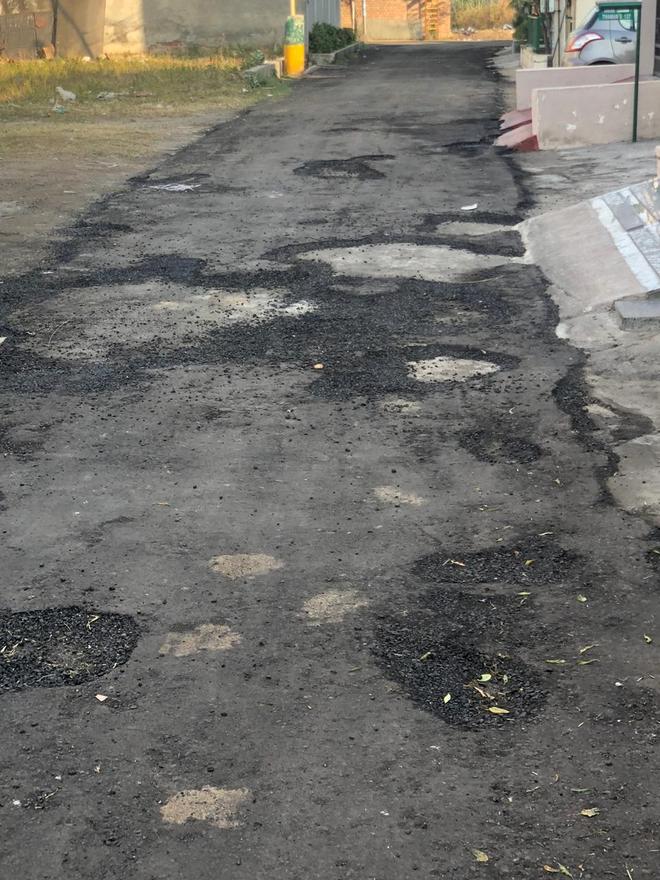 A broken road at KVM Colony in Ludhiana. Tribune photo

The role of a number of contractors and officials concerned had remained under scanner for poor road work in the city in the past. Now, two newly carpeted roads of KVM Colony in ward number 78 from where Mayor Balkar Singh Sandhu is the elected councillor have started getting damaged, raising questions over the role of officials and the contractor concerned.

It is learnt that the roads were carpeted recently but the work done by the contractor got exposed when rain lashed the city a day after Diwali. Now, these roads are in a bad condition.

A resident said, “It is shocking that the roads started getting damaged within days after the carpeting work was done. It was the responsibility of the MC authorities to ensure that the work was done in the right manner as per the norms. We request the authorities to look into the matter and take the necessary action in this regard.”

It has been seen that newly carpeted roads in a number of other city areas had got damaged within a short time in the past too, but the MC seems to have not learnt any lesson so far. Thus, questions are being raised over the role of the MC’s B&R branch officials concerned which are responsible for the road work. Notably, the samples that were collected from different roads in the city have failed the quality test earlier this year. But, the responsibility of the officials was yet to be fixed.

When the matter regarding KVM Colony roads came to the notice of Mayor Balkar Singh Sandhu, he said strict action would be taken in this regard. He has given directions for the re-carpeting of the roads.

He said, “No payment has been released to the contractor and he has been directed to re-carpet the roads once the weather conditions improved.”

The Mayor said he never allowed poor work anywhere in the city and he could not tolerate poor work in his ward too. He said the matter regarding KVM Colony roads would be dealt with strictly.