Next Green Revolution must be soil-based: Laureate 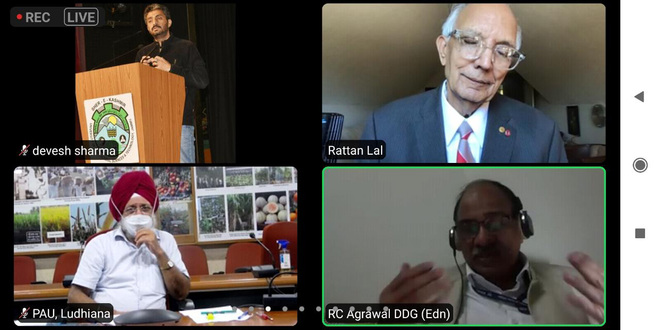 The World Food Prize Laureate, Dr Rattan Lal (top right), interacts with agriculture experts across the country during a webinar organised by the PAU. Tribune photo

It was an intellectual treat for more than 270 doyens of agriculture across the country to listen and interact with the World Food Prize Laureate and scientist, Dr Rattan Lal, at a webinar on ‘Soil- Centric Green Revolution: A Paradigm Shift’, organised by Punjab Agricultural University (PAU), Ludhiana. Befittingly called ‘Rock star of our Soils,’ by the Ohio State University, Dr Rattan Lal described it as a great honour in itself to be a graduate of the PAU.

In a gripping presentation, Dr Lal aptly called for the next Green Revolution to be soil centric and turned to Gurbani for his opening remarks, quoting Guru Nanak Dev from the Jap Ji Sahib verse of “Pawan Guru, Paani Pita, Mata Dharat Mahat.” “The great Guru described in very simple language the inseparable link between three pillars of the environment, namely air, water and earth,” shared Dr Rattan Lal while bringing home the common message of ‘natural resource conservation’ advocated by all great religions. “Rather than input based (depending on varieties, fertiliser and irrigation), the next Green Revolution must be soil-based to make it more resilient, eco-system-based by increasing efficiency of eco system, and must be driven by science, management and spirituality,” he stressed. Dr Lal further described the rhizosphere (the layer of soil with very dynamic environment where plants, soil, microorganisms, nutrients and water meet and interact) as the only place on earth where life and death become two sides of the same coin, called the soil.

Dr Lal spoke of how PAU was at the forefront of India’s phenomenal green revolution that falsified the world prophecy of the country’s impending disaster due to food shortage and transformed the country’s image as a begging bowl to the bread basket of the world. He proudly stated India’s top position as world’s second largest producer of both wheat and rice and the largest exporter of rice. However, Dr Rattan Lal said, the dilemma lies in the degradation of our soil, polluted waters, impure air and loss of bio-diversity. Specifying the chief reasons of soil degradation in India as water erosion, wind erosion, water logging, salinity/ alkalinity, soil acidity etc, Dr Lal criticised the tendency to take everything from the soil, thereby rendering it deprived of essential resources. He explained from his own experiment in Africa where the soil that had no nutrients left in it became dead and as a result did not respond to good varieties, fertiliser or pesticide.