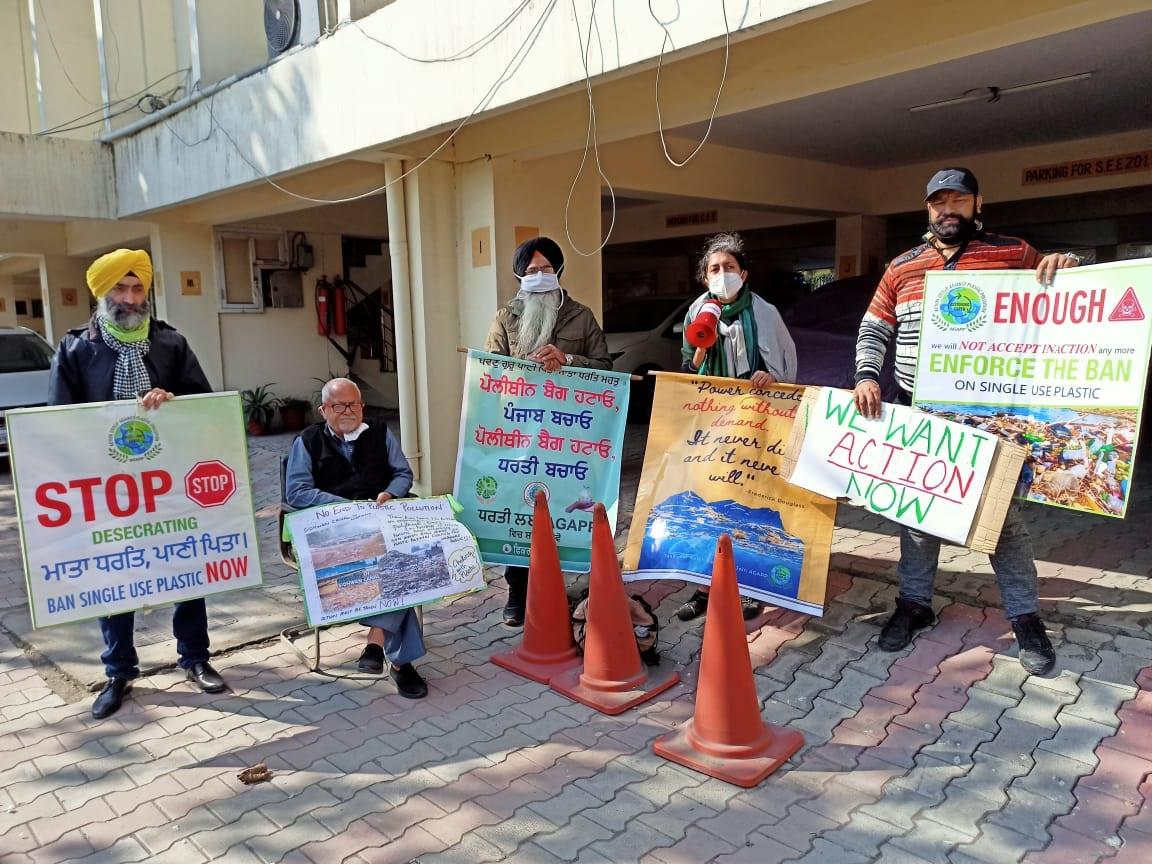 AGAPP activists hold a protest at the PPCB office in Ludhiana.

Action Group Against Plastic Pollution (AGAPP), an NGO, held a protest at the PPCB office in the Focal Point, here, on Friday to demand enforcement of ban on manufacturing and sale of plastic carry bags and single-use plastics.

Protesting activists said plastic carry bags were banned by the state in 2016 but the departments concerned had failed to ensure the implementation of the ban till date.

Dr Navneet Bhullar of the NGO said: “Officials of the PPCB, Ludhiana, during a meeting with the NGO on January 19 had claimed that they would organise a meeting with the Municipal Corporation, Ludhiana, and indicated they wanted the local plastic manufacturers’ association to be present in it as well. No such meeting has yet been announced and the Chief Engineer of the PPCB expressed inability to organise any meeting, citing ongoing election duties. AGAPP insisted on a meeting soon, saying it has been six years since the Act regarding the ban was passed in the state and it must be enforced.”

“The PPCB Chief Engineer today, in the presence of plastic manufacturers, washed his hands of all responsibility in enforcing the ban on manufacturing of plastic carry bags and asked AGAPP to go to the Municipal Commissioner,” she said.

Earlier also, the NGO members had staged protests at the MC office but nothing was done by the civic body to ensure implementation of the ban. The members demanded that the PPCB must close plastic bag manufacturing units in Ludhiana which were the source of illegal plastic carry bags and single-use plastics, choking the Buddha Nullah and the Sidhwan Canal and also causing unmanageable heaps of plastic garbage across the city and at Kakka village where a landfill is located.

Meanwhile, PPCB officials offered to go and check the units if the NGO would provide names and addresses of the units violating the law, they said. Gunwant Singh of AGAPP said they had written to the Chief Minister three times since December 2020 to enforce the ban but to no avail. Jagdish Nanda, a poet and activist, Mohinder Singh Sekhon of the Punjabi Pasar Bhaichara, Jaskirat Singh of the PAC for Sutlej and Mattewara, were also took part in the protest.