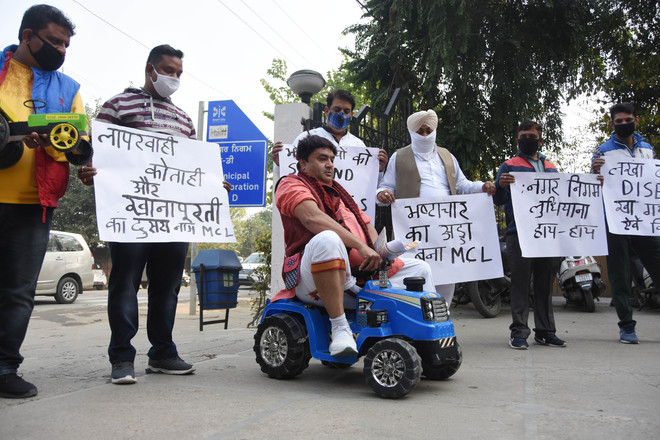 Members of Yuva, an NGO, protest in Ludhiana. Himanshu Mahajan

Members of Yuva, an NGO, staged a protest at the MC’s Zone D office here and demanded that the sanitary inspectors who were found guilty in an inquiry related to alleged embezzlement in the usage of fuel, should be dismissed from duty.

Earlier, a probe was marked regarding alleged embezzlement in the usage of fuel for non-functional tractors of the MC. After getting the inquiry report, the MC Commissioner recently ordered suspension of chief sanitary inspector and two sanitary inspectors for their alleged negligence in discharge of their duties and misconduct.

Kumar Gaurav of the NGO held the protest with toy tractors at the MC’s Zone D office today.

“The erring inspectors should be dismissed from duty and FIR should be lodged against them so that nobody dare to misuse the MC funds,” he said.

He submitted a memorandum in this regard at the MC office. — TNS