Reconstruction of the bridge hanging fire for four years 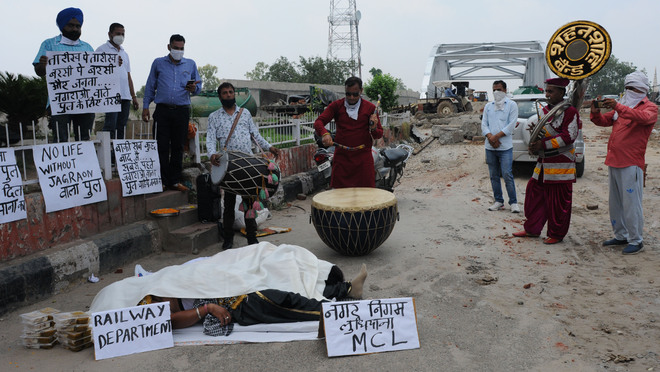 As the reconstruction of Jagraon Bridge has not been completed to date, city-based NGOs observed the fourth closure ‘barsi’ of the bridge to awaken the authorities concerned.

The city residents were assured that the bridge would be reconstructed by March 2019. Traffic snarls are commonly witnessed on the parallel bridge (the other side of Jagraon Bridge).

Today, a few activists visited the bridge site to mark the fourth “barsi” of its closure. Kumar Gaurav of ‘Yuva – the Strength’, an NGO, played the role of ‘Sacha Yadav’ and his aide Gaurav Bajaj that of ‘Kumbhakarana’ in a symbolic drama which was staged to awaken the MC and Railways authorities.

Kumar Gaurav said: “The Jagraon Bridge is the lifeline of the city. People have suffered a lot due to the delay in its reconstruction. The MC and the Railways have been delaying the project due to which we are forced to mark the fourth ‘barsi’ of its closure.”

Gurpal Singh Grewal, an activist, demanded completion of the project at the earliest. “Many commuters are forced to take a detour. Traffic snarls are a common sight on the parallel bridge as well as on the other roads in the city. If the authorities had deployed an experienced contractor, the project would have been completed in time. The government should focus on improving the infrastructure in the city.”

The NGOs had observed the first ‘barsi’ in July 2017 after which the state government had released funds for the project. The MC had then released about Rs 24 crore to the Railways. However, reconstruction work was started in May 2018. The second ‘barsi’ was observed in July 2018. The third barsi was marked in July 2019.

Bridge will be ready by August 15: Mayor

Mayor Balkar Singh Sandhu said work was underway at the Jagraon Bridge site. “Earlier, work got delayed due to the lockdown/curfew imposed to fight Covid. The bridge will be ready by August 15,” he said