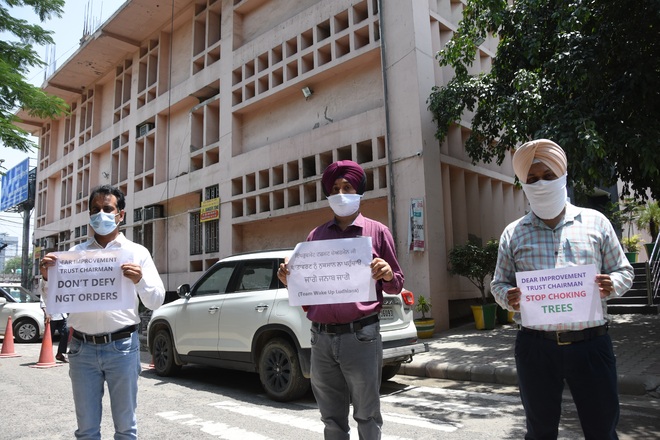 Members of the Council of Engineers and NGOs hold a protest against the non-compliance of the NGT directions in front of the LIT office in Ludhiana on Tuesday. Tribune photo: Himanshu Mahajan

During a peaceful protest by the Council of Engineers (CoE) along with NGOs Wake Up Ludhiana and Naroa Manch Punjab against violation of NGT directions by Ludhiana Improvement Trust staff and causing damage to trees, LIT Chairman Raman Balasubramaniam reportedly courted a controversy. He is said to have allegedly not only used derogatory and abusive language against the National Green Tribunal — a quasi-judicial body — but also threatened the protesters with forcible eviction if they do not leave the place at their own.

Carrying placards against the continuing practice of laying cement concrete, block pavers or interlocking tiles around trees, leaving no place for air and water to seep in, the protesters were demanding that vacant space of one metre all around the trees ought to be left to enable the plants to breathe as directed by the National Green Tribunal (NGT) made in the case of Kapil Dev vs State of Punjab and others (OA No 62/2021).

Kapil Arora, CoE president, who was present at the protest, said the LIT chairman had made an attempt to snatch the fundamental right of peaceful protest and misbehaved with protesters in the presence of activists of several other NGOs.

Jaskirat Singh and Kuldeep Singh Khaira of the Naroa Manch Punjab stated that the LIT engineering and horticulture branches were openly defying the directions of the NGT by covering stems of plants and trees with concrete or interlocking tiles, which amounted to contempt of court.

“Roots of trees absorb water, oxygen and other nutrients that are essential to growth and development of trees but due to lack of nutrients due to choking of their roots, the grip/strength of roots of matured trees with the earth decreases and such trees are more likely to fall during winds and storms. It was with this concern that disposing of a petition filed by the engineers’ body the NGT had issued directions to the MC, LIT and GLADA to take remedial action to clear the roots of trees within one meter radius of bases of exiting trees in Ludhiana.