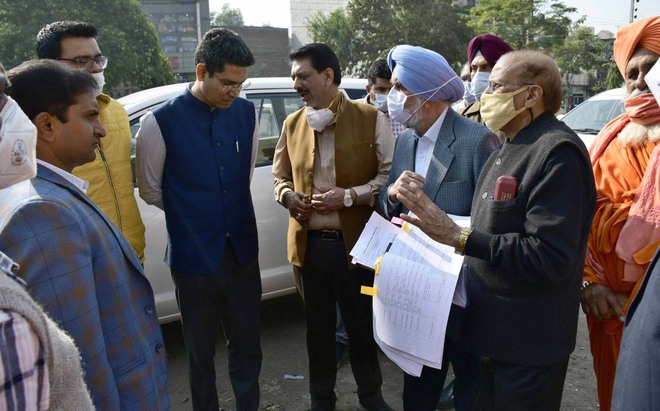 NGT panel members with MC officials during a visit to Ludhiana.

The National Green Tribunal (NGT) monitoring committee on Thursday ‘pulled up’ the Ludhiana MC for failing to ensure the source segregation of waste in the city. The panel, led by Justice Jasbir Singh (retired), gave directions to the MC to ensure waste segregation in the city.

Panel members along with the MC and PPCB officials inspected some static waste compactor sites in Ludhiana today. An official said the panel found that source segregation of waste is not being done by the Ludhiana MC as per its claims.

Justice Jasbir Singh along with officials visited static waste compactor sites at Middha Chowk, Rishi Nagar, Sarabha Nagar and Bhai Chatar Singh Park. However, the civic body has not ensured waste segregation at even these sites. The MC has run multiple campaigns in the past but it failed to ensure waste segregation in the city.

The panel also inspected a factory in the city today. — TNS