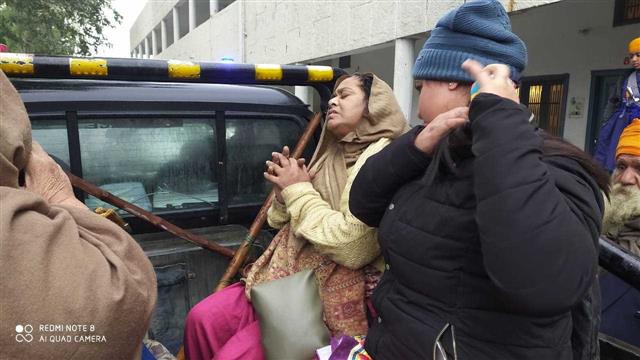 Varinder Kaur being taken to the Civil Hospital at Dehlon.

Nihangs allegedly attacked and injured a middle-aged woman on suspicion of a sacrilege attempt when she got emotional on being denied baptism during the ‘amrit sanchar’ programme and insisted on continuing praying while sitting in the hall of Gurdwara Manji Sahib Alamgir.

Varinder Kaur of Habas village and her sister Charanjit Kaur of Meharban village had reportedly visited the gurdwara to pay obeisance and get baptised. When their turn came sewadars denied the opportunity to Varinder Kaur. Varinder Kaur got upset and insisted on continuing prayers while sitting in the hall. However, sewadars tried to make her leave the place and sit aside with the sangat.

It was during this period that some of the devotees or sewadars prepared a video mentioning that a woman had tried to commit sacrilege. Some Nihangs reached the place with their traditional weapons. The Nihangs allegedly assaulted the woman, who got injured.

The management of the shrine called the police. The Delhon police, led by SHO Sukhjit Singh, shifted Varinder Kaur to the Civil Hospital, Dehlon.