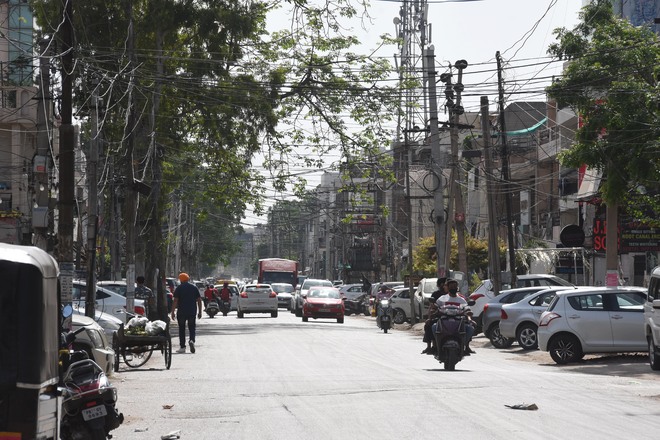 Vehicles parked on roadsides due to commercial activities at BRS Nagar in Ludhiana. Photo: Ashwani Dhiman

When the name of Ludhiana was announced in the list of first 20 cities to be developed as smart cities around five years ago, the residents had pinned many hopes to see major developments in the city. But, the authorities concerned seemed to be not serious for the same as many of the residents have been left to suffer due to illegal commercial activities in various residential areas in the city.

The role of officials concerned and several politicians was also under scanner for promoting the violations and protecting the violators. The illegal commercial activities are rampant in even posh residential areas of Bhai Randhir Singh (BRS) Nagar, Sarabha Nagar, Model Town, Rajguru Nagar Road and many others, creating a lot of nuisance. The questions are also being raised as to why a number of roads were declared commercial by ignoring the parking arrangements and traffic-related issues.

Most of such unauthorised commercial units, factories and godowns in residential areas lack parking arrangements. Thus, vehicles are generally parked on roads causing traffic snarls. Moreover, the majority of such units lack fire safety arrangements, posing threat to the residents. Also, there is no check on noise pollution being created by the industrial units.

Col JS Gill, a resident of BRS Nagar, said, “The Ludhiana Improvement Trust had constructed shops and booths for commercial purposes at BRS Nagar but many of these are lying closed. On the other hand, the commercial units are being opened by violating the norms in residential areas. Why the government authorities turned a blind eye to such violations?”

Col Gill said, “If the building branch and town planning wing officials have not to act against the violations, what is need of such branches? The exemplary punishment should be awarded to the erring officials so that no official can dare to ignore any such violation in the future. Besides, FIRs should be registered against the political leaders who protect the violators.”

Another resident said, “Due to apathy and negligence of the Municipal Corporation, Ludhiana Improvement Trust or other departments concerned, the residents are suffering. No action is taken on complaints against violations.”

In 2019, a survey of commercial violations was conducted in 73 town planning schemes and development schemes across the city. Around 7,000 violations were found. Instead of taking action, the MC’s building branch had recommended for regularisation of such violations but some NGOs had raised voice against the MC’s such ‘wrong’ plan.

Sources said political interference was very high in the MC’s building branch. Now, the MC was planning to get more roads declared commercial in the city, sources said.

By violating the building bylaws, a number of commercial stores, restaurants and other units have been opened in residential areas of Sarabha Nagar. A resident of Sarabha Nagar, Rahul Verma, said, “The roads are being declared commercial by ignoring the safety of residents and traffic-related issues. If such wrong practices are to be allowed, the city can’t become smart.”

“Due to rising commercial activities at Sarabha Nagar, we are forced to suffer. The visitors to unauthorised commercial units park vehicles outside houses. The MC and other departments concerned have created a big mess in various residential areas by ignoring such violations,” he added.

A resident of Model Town, Amarjit Singh Tikka, who is Chairman of Punjab Medium Industries Development Board, said, “Hundreds of commercial establishments and nursing homes have come up in residential areas of Model Town. Even, ambulances of nursing homes are stationed on road. Unauthorised commercial activities are common in about 60% residential areas of Model Town. Such wrong activities should be stopped and building plans must be reviewed.” Municipal Town Planner (MTP) SS Bindra said, “We are not allowing any new commercial construction in residential areas. We are waiting for the government’s one-time settlement policy. If no relief is given for old constructions, we will take the required action.”