No check on sale, use of Chinese strings in Ludhiana

Unabated use has led to fatal injuries, mishaps 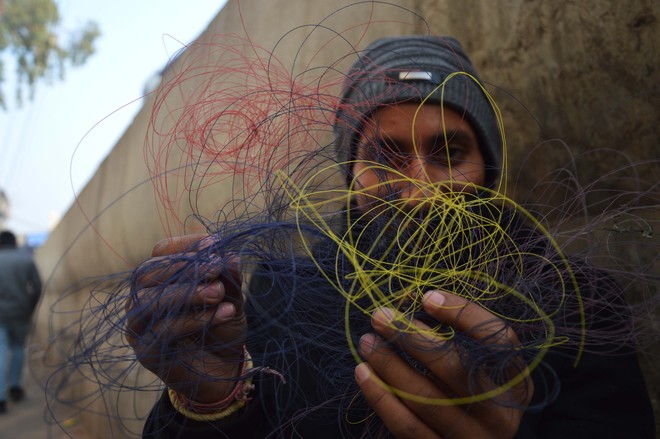 A man shows Chinese strings found on a road in the city. photo: Inderjeet Verma

A 45-year-old man had earlier this year got severe facial injuries after he came in contact of plastic string also known as Chinese string. He was riding a bike on his way home on Hambran Road when he met with the accident. He received nearly 15 stitches on his face due to the injury.

Jagjeet Singh Mann, of Watawaran Sambhal Society, has demanded from the government to ensure complete ban on manufacturing, sale and use of the plastic string that has left many persons injured. He said, “It is difficult to break the string which is still being openly used for kite flying in the city. Many persons have been injured after coming in contact of such kind of dangerous string. Such strings can slit the throat. A number of people have received injuries on face, lips and throat. Besides, a number of birds have been killed after coming in contact of this string. Required action must be taken to stop the sale and use of such kind of strings.”

Satish Thaman, member, Ludhiana West Grievances Redressal Committee, said, “The district administration, the police and other authorities concerned must take strict measures to check the manufacturing, sale and use of such dangerous strings. The people should also ask their children not to use such strings that have left a number of people severely injured. A massive awareness campaign should be carried out to stop use of such strings for kite flying.”

Notably, the matter regarding dangerous string was earlier also raised during the Vidhan Sabha session in February by MLA Simarjeet Singh Bains. It is required to mention that the plastic or Chinese strings are being used openly in the district for over a decade but no concrete steps are being taken to avert mishaps due to use of such dangerous strings.