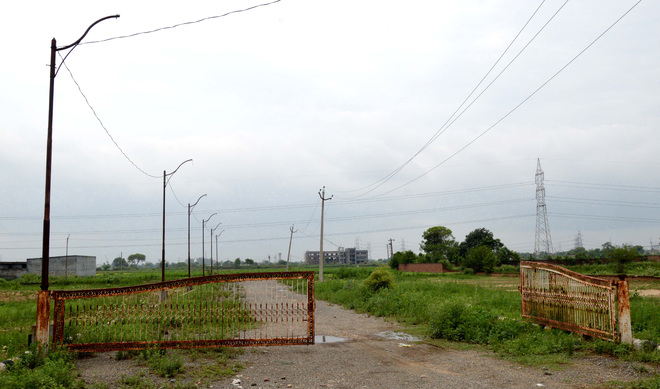 An unauthorised colony outside the MC’s jurisdiction in Ludhiana. File photo

When many of the illegal colonies were being developed, the Greater Ludhiana Area Development Authority (GLADA) and Municipal Corporation (MC) had not taken any action to stop the violations at the initial stage. Unaware of the difference between legal and illegal colonies, many persons purchased the plots in such unauthorised colonies wherein no development has taken place even after the passing of years. The questions are being raised over the role of the officials concerned who had ignored the violations.

A resident on Jassian Road had purchased a plot in a colony about five years ago. As the cost of the plot was low, he had bought the plot but had no information that the colony was not approved by the government. “The basic amenities like water supply, sewerage system and repair of roads have not been ensured in the area as the colony is still unauthorised. We are suffering due to no development in the area,” he said.

Like him, a number of people who had purchased plots in unauthorised colonies are feeling cheated due to no development. Even, the authorities concerned have failed to take any concrete action against many of the colonisers who had sold plots in illegal colonies.

Even at present, several colonisers and property dealers are selling the plots in unauthorised colonies by making false claims that these colonies are authorised. To sell the plots, such colonisers are also targeting the poor people, including migrants from other states, by offering them loan and instalment options.

Satish Malhotra, a Congress leader from Ward 15, said “On the Kakka-Dhaula road, illegal colonies are still being developed under the nose of MC officials. No action is taken against the erring colonisers and officials concerned. Even, the developers of a number of other illegal colonies have not submitted regularisation fee, due to which no development has taken place in these colonies.”

Karamjit Singh of the Ludhiana Architects Association said, “It is the fact that when many of the illegal colonies were being developed in the areas under the MC and GLADA, the authorities concerned had ignored these violations due to which the people are forced to suffer. There is no development in such colonies. The government had introduced regularisation policy but many of the colonisers have not got their unauthorised colonies regularised. Even the residents had paid regularisation fees of plots in some colonies but development is still missing. At present, new unauthorised colonies are still being developed in GLADA areas by violating the norms. The government should take concrete steps to resolve the issues.”

Kuldeep Singh Khaira of Vigilant Citizens’ Forum said, “The departments concerned have not taken a decision on many applications that were filed by the colonisers for regularisation of their illegal colonies for years. More unauthorised colonies are coming up in the jurisdiction of the MC and GLADA. The people who purchase plots in such colonies are forced to suffer. Action should be taken against the erring colonisers.”

Following a complaint in January, Municipal Town Planner (MTP) SS Bindra had given directions to all Assistant Town Planners (ATPs) of the Municipal Corporation’s building branch to submit a status report on the illegal colonies in their respective zones. Bindra, however, claimed that no new unauthorised colony had come up in the jurisdiction of the MC.