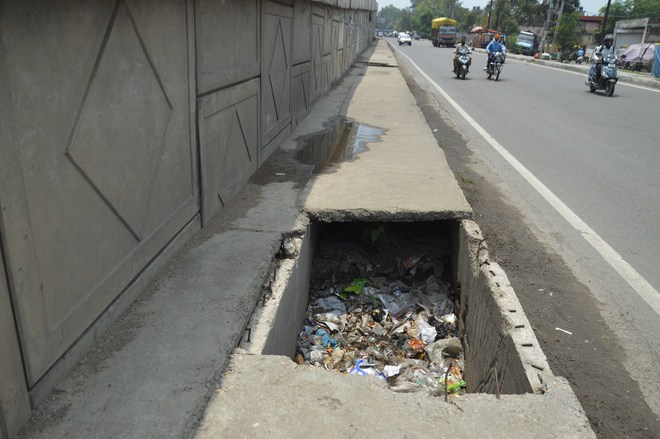 Garbage dumped in a storm water drain with a broken cover on the NH-44. Photo: Inderjeet Verma

Even after passing of several years, a major problem of waterlogging on national highways that pass through the city has not been resolved before the rainy season this year too. Thus, commuters may suffer again due to waterlogging during the monsoon.

Drains not cleaned for years

Storm water drains along the national highway near Jalandhar Bypass, Karabara Chowk, Giaspura Chowk, near the Dhandari railway station and other points in the city on the Jalandhar-Delhi road (NH-44) are lying choked. Several covers of the drains have broken while trash dumped in drainage structures has not been cleaned for years.

Whenever it rains heavily, thousands of commuters are forced to suffer due to water accumulation at various points on the NH-44 (Jalandhar-Delhi Road) and the NH-5 (Chandigarh Road) in the city. Residents blamed the National Highways Authority of India (NHAI), the MC and the district administration for not getting the issue resolved till date.

Storm water drains along the national highway near Jalandhar Bypass, Karabara Chowk, Giaspura Chowk, near the Dhandari railway station and other points in the city on the Jalandhar-Delhi road (NH-44) are lying choked. Several covers of the drains have broken while trash dumped in drainage structures has not been cleaned for years.

A resident near the Jalandhar bypass said: “As the drainage system is not functioning properly, waterlogging is commonly witnessed at various locations on Delhi Road. We have raised the matter many times but the authorities concerned paid no heed to the issue for a long time. It seems commuters would be forced to face inconvenience this rainy season too.”

Notably, a group of residents had earlier raised the issue of waterlogging at Giaspura Chowk but no action was taken by the department concerned, alleged residents.

Commuters faced hardships due to water accumulation near Police Colony Chowk and other points on Chandigarh Road here when the rainfall lashed the city recently as the MC and NHAI are yet to resolve the waterlogging problem. Residents blamed the MC’s poor sewer system for water accumulation during the rainy days.

In 2020, MC officials had stated that the issue would be resolved soon after installing the storm water drainage line but the project was yet to be started.

“Sewers start overflowing on the stretch whenever it rains, even after a short spell. When vehicles pass through the accumulated water, the water flows into our house too.” said Premjit Singh of Chandigarh Road, Ludhiana.

President of a city-based NGO, Yuva, Kumar Guarav, said: “People pay huge taxes to governments. It was the responsibility of the governments and its departments concerned to resolve such issues on a priority basis. If the authorities did not resolve the problem at the earliest, we will be forced to hold protests.”

Mayor Balkar Singh Sandhu said a project for the installation of the storm water drainage system project on Chandigarh had been approved and the NHAI will handle the Rs 6-crore project.