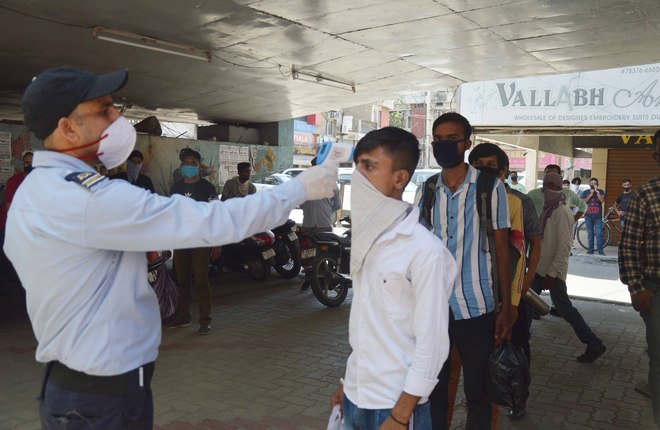 A worker being screened before entering a workplace in Ludhiana. Photo: Inderjeet Verma

Movement of individuals for all non-essential activities would remain prohibited in the district between 9 pm and 5 am during Lockdown 5.0/unlock 1.0.

District Magistrate-cum-Deputy Commissioner Pradeep Kumar Agrawal said today that the new guidelines to be implemented from June 1 to 30 had been issued. Violations would be punishable under sections 51 to 60 of the Disaster Management Act, 2005, besides legal action under section 188 of the Indian Penal Code (IPC).

He said persons above 65 years of age, persons with co-morbidity, pregnant women and children below the age of 10 years were advised to stay at home except for essential requirements and for health purposes.

Agrawal said spitting in public places, consumption of liquor, pan, gutka, tobacco and others in public places was prohibited. However, there would be no restriction on their sale.

The Deputy Commissioner said the number of guests would not exceed 50 in marriages and not more than 20 in funeral/last rites. He said that religious places/places of worship for the public would remain closed till June 7 along with hotels and other hospitality services and shopping malls. Restaurants may be opened for take-home or home delivery services but in-dine services remain closed till June 7.

He said two-wheelers (1+1) passengers and four wheelers (1+ 2) passengers would be allowed, adding that no pass would be required for permitted activities such as shopping, going to the office and workplace. Shopping malls would remain closed but all shops including shops in main bazaars in both urban and rural areas are allowed to open between 7 am and 7 pm. He said that liquor vends would however remain open from 8 am to 8 pm and barber shops, hair-cut salons, beauty parlours and spas would be allowed to run from 7 am to 7 pm.

No curbs on agricultural, industrial operations

Agrawal said sports complexes and stadiums would be allowed to open without spectators, adding that all categories of industries were allowed to operate in both rural and urban areas.

Social distancing must for all activities

The Deputy Commissioner said social distancing i.e. minimum six feet distance for all activities shall always be maintained. No separate permission would be required by the industries and other establishments to resume their operations, adding all employees, be it government offices, private offices and other workplaces, would be allowed to move without any requirement of pass during the permitted hours i.e. 5 am to 9 pm.

All shops including shops in main bazaars, in both urban and rural areas, are allowed to open between 7 am to 7 pm. Liquor vends from 8 am to 8 pm and barber shops, hair-cut salons, beauty parlours and spas can open from 7 am to 7 pm.

Migrants get 2 more days to register for train journey

For migrants aspiring to travel to their home states by train, registration facility has been extended by two more days. Deputy Commissioner Pradeep Kumar Agrawal said the migrants, who wanted to travel to their home states by train and could not register or their turn did not come yet, could visit Guru Nanak Stadium, Ludhiana, on June 2 and 3 at 11 am and register for their journey. He appealed to the migrants to not bring their luggage along because on June 2 and 3, only their registration would be done.