They face higher risk of exploitation due to lack of security 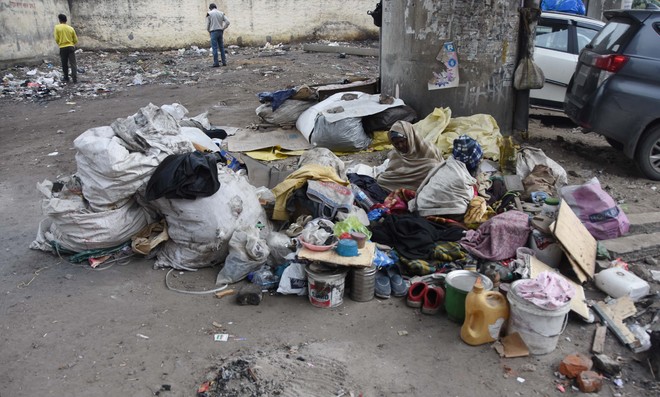 Many homeless stay in the open under the flyover near the civic body’s night shelter near Clock Tower in Ludhiana. Photo: Ashwani Dhiman

Though there are four night shelters of the Municipal Corporation in the city, none of these are exclusively for women. Some homeless women were seen on roadsides or under flyover amid the cold waves.

Notably, one room each at a few night shelters was reserved for women but men were allowed to rest there when these are vacant.

At one of the night shelters, an employee, on condition of anonymity, said, “A few women used to visit at the night shelter nearly two years ago. But, now not even a single woman visit here during this winter season. Many times men come here in inebriated condition and get into scuffle with others. It is difficult for women to stay under such conditions.” An employee at another night shelter said he had never seen any woman visiting there.

Notably, a number of women, including elderly, used to stay under the flyover near the Railway Station, Ludhiana, and other areas in the city a few years ago. However, such women are seen in less numbers now. An elderly woman and a man live under the flyover just near MC’s night shelter in Zone A area. The woman was sleeping in open in such cold nights. Besides, some homeless women along with their family members live in temporary structures in absence any proper shelter.

Shalini Pathak, a teacher, said, “The government should set up separate night shelters for homeless women in the city and female staff should be deployed there. Moreover, required arrangements must be ensured there for the security of women.”

Mayor Balkar Singh Sandhu said, “We will soon take necessary steps to set up a separate night shelter for women in the city.”