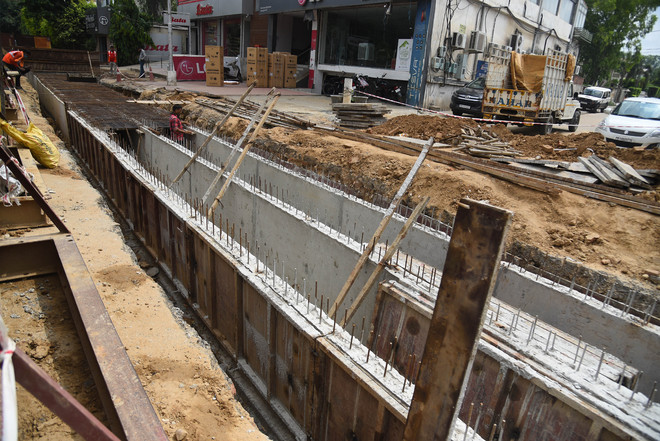 Ongoing work for beautification of Malhar Road. None of the projects launched under the Smart City Mission in Ludhiana has been completed yet. Tribune photo: Himanshu Mahajan

The observation – ‘no visible impact of smart city mission projects in city so far’- coming from none other than one of the directors of Ludhiana Smart City Company Limited (LSCL), the special purpose vehicle set up for execution of projects envisaged under centrally funded Smart City Mission, does carry a lot of weight. The LSCL Director, Sanjay Goel, has indeed hit the nail on the head by asserting that none of the projects under this ambitious scheme has been completed even after five years when the city was selected to don the ‘smart cap’ among a batch of 20 cities.

‘No relief for city residents’

In a communication to the Punjab Chief Secretary, LSCL Director, Sanjay Goel, who is also the chairman of the Punjab chapter of the Indian Institute of Architects, has said in spite of the Project Management Consultants (PMC) working for the past four years under the Smart City Mission, there has been little achievement and practically no relief has been provided to the city population through any pan-city project.

In a communication to the Punjab Chief Secretary, Goel, who is also the chairman of the Punjab chapter of the Indian Institute of Architects, has said in spite of the Project Management Consultants (PMC) working of the past four years under the Smart City Mission, there has been little achievement and practically no relief has been provided to the city population through any pan-city project.

He has desired that explicit directions be issued to the PMC to focus priority-wise on most pressing pan-city projects only so that the whole population of the city gets relief with execution of various projects which are at present lying incomplete.

Goel has emphasised that in the changed scenario created by theCovid-19 pandemic, efforts are needed to be taken on a war footing to commence work on a project to strengthen health infrastructure to enable the healthcare providers to fight Covid and other serious diseases.

Further, speedy action ought to be taken to solve decades-old traffic congestion and parking problems all over the city and at the same time bringing improvement in the condition of roads, especially in industrial pockets.

Among other projects which required to be taken up on priority under the mission include cleaning of Buddha Nullah, construction of recreational areas along the nullah, shifting of interstate bus stand from its present location, improvement of roads, laying storm water drainage, upgrade and modernisation of railway station and a speedy completion of the international civil terminal at Halwara Airport.

He points out that multiple departments undertaking city development have proved rather a stumbling block than of much assistance in execution of several projects. “Repair and strengthening of Jagraon Bridge is a live example of dragging feet and delays as the project which should not have taken more than six months to complete, has been dragging for the past four years and even now it has not become operational,” he adds.