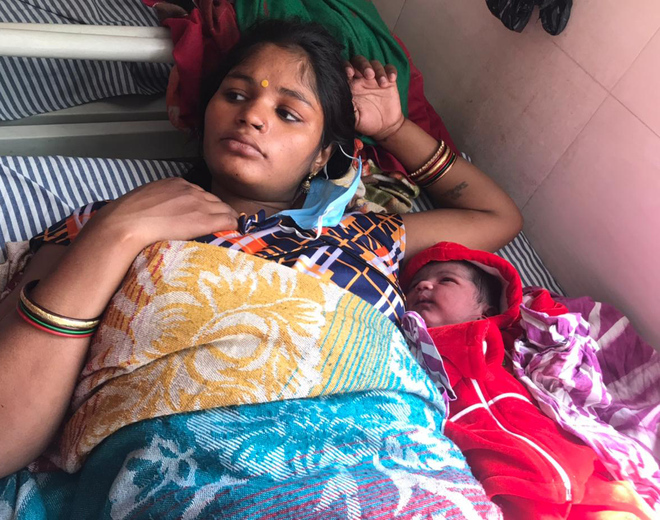 The woman with her baby at the Civil Hospital in Ludhiana. Photo: Ashwani Dhiman

Last week, a woman had delivered twins in the park of the Civil Hospital here and today, a woman reportedly delivered a baby on the floor of the hospital.

Kiran from Dhandari came to the Mother and Child Hospital (located on the premises of the Civil Hospital) She was nine months’ pregnant and in advanced stage of her pregnancy.

Shanu Yadav, husband of Kiran, alleged that he came to the hospital with her wife for her delivery.

“The doctor checked her and asked to get a slip of the Emergency. I went to took the slip and when I returned, my wife was going to the washroom. I asked her not to go but she insisted on going and when she returned, she delivered the child on the floor, outside the labour room,” he said.

He added that after she delivered the child, the staff of the hospital came running and quickly took her and the baby on a stretcher to the labour room.

“Earlier, nobody was present. Staff were busy doing their work and when the baby was delivered on the floor, everyone came running to the spot,” he said.

Dr Hatinder Kaur, Senior Medical Officer (SMO), MCH, said the woman was in her advanced stage of pregnancy and came to the hospital without any investigation report. Still, she was admitted and taken to the labour room. Nobody was accompanying her and when asked, she said her husband had gone home to get her reports.