Now, cameras on wheels to keep tab on criminals in Ludhiana district : The Tribune India 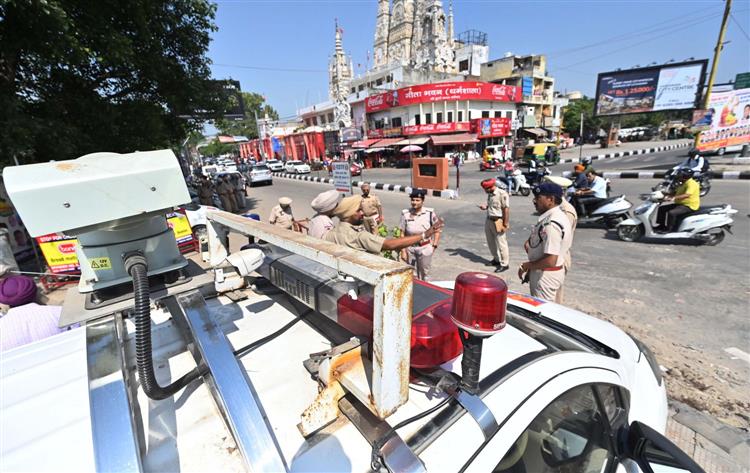 In another step towards becoming tech-savvy, the Ludhiana Commissionerate Police have installed high resolution cameras on police control room (PCR) vehicles to keep a tab on activities of criminals, anti-social elements and other suspected elements in the Police Commissionerate limits, the officials have said.

Pan-tilt-zoom (PTZ) cameras, which are built with mechanical parts that allow them to swivel left to right, tilt up and down, and zoom in and out of a scene, will be linked with the safe city control room to monitor the live feed and save the recording, the Commissionerate Police have revealed.

Commissioner of Police (CP) Kaustubh Sharma, who reviewed the working of the PCR, told The Tribune, here on Monday that the use of technology was aimed at preventing, controlling and solving crime incidents in the commissionerate territory.

He said the working of the PCR had been further improvised and the patrolling, both day and night, had been intensified in the wake of the current festive season with a renewed focus on public places, especially religious and recreational, to ensure safety and security of the people at large.

Divulging the working of the PCR, Joint Commissioner of Police (JCP) Saumya Mishra, who heads the PCR wing as well, said PTZ cameras had already been installed on 18 of the total 23 PCR four-wheelers while the process to cover the remaining five vehicles, besides five jeeps that were part of the rural rapid response team, was under progress.

She said 59 motorcycles were also part of the PCR fleet that patrol the length and breadth of the Commissionerate 24x7 with the help of 363 personnel, including seven sub-inspectors, 189 assistant sub-inspectors, 36 head constables, 76 constables, and 55 other rank workforce on duty.

She said the patrolling schedule of the PCR teams was also divided in such a manner that various places were covered in a meticulous manner.

In the daytime, PCR teams were tasked with patrolling around schools and colleges between 7.30 am and 9.30 am, banks, ATMs, post offices, PSPCL cash centres, jewellery shops and financial offices between 9.30 am and 4.30 pm, patrolling in beat areas using hooter and checking of suspected persons between 4.20 pm and 5.30 pm, and nakabandi (checkpoints) and traffic duty between 5.30 pm and 8 pm.

On receiving information about any incident, PCR teams reach the spot within minimum possible time. The one-stop PCR telephone number is 112 and calls received on it are flashed immediately through the control room and very high frequency (VHF) radio wireless sets.

Camera-fitted PCR vehicles will further help in the investigation of incidents captured on cameras, besides proving a deterrent to criminals and anti-social elements. We have intensified patrolling to increase police presence during the festive season. — Dr Kaustubh Sharma, Commissioner of Police

The use of technology gives impetus to the working of the police force. Since PCR teams are first responders and their presence deters crime, their vehicles fitted with cameras having recording facility, will help them act more effectively. — Saumya Mishra, Joint Commissioner of Police