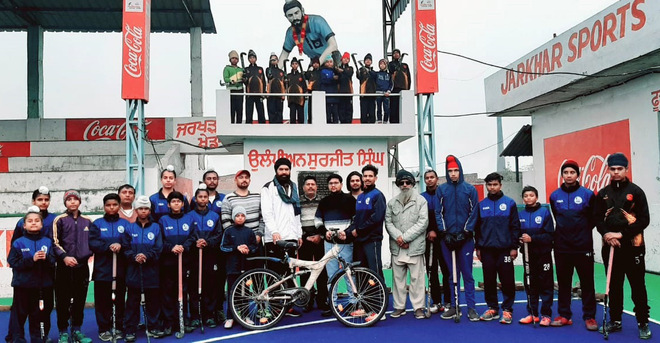 A function was organised at the main stadium of Jarkhar village where tributes were paid to the penalty corner specialist who died in a road accident near Jalandhar in 1984. Flowers were placed at the life-size statue of Surjit Singh, installed at the stadium. A two-minute silence was observed to pay tributes to the hockey legend.

Jagroop Singh Jarkhar, director of the academy, recalled the achievements of the star player. Rohtas Kumar from the Sports Authority of India (SAI), Delhi, who was here to take stock of the arrangements being provided to the hockey trainees, along with Gurvinder Singh, MD of Divya Enterprises, Ashutosh, Maninder Singh, coach Gursatinder Singh Pargat, Jagdev Singh Jarkhar and Tejinder Singh were present on the occasion.

Gurwinder Singh Jarkhar (Guri), a talented and upcoming hockey player of the academy, was honoured with the “Man of the Year” award. He was given a bicycle. Besides, some other trainees were given track suits and hockey sticks.

An exhibition match between Olympian Surjit XI and Olympian Prithipal Singh XI was also held on the occasion which remained tied at 3-3.

Coach Gursatinder Singh said that a hockey clinic for new entrants would be organised in February in which Olympians and international stars would visit the academy and give tips to the trainees. — OC