Sahir Ludhianavi’s 100th birth anniversary was on March 8, but Ludhianvis apparently failed to rise to the occasion 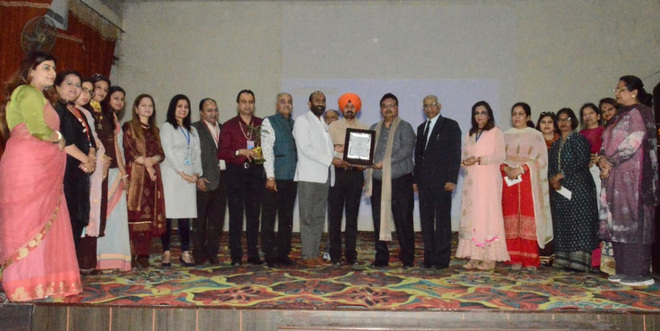 The 100th birth anniversary of Sahir Ludhianvi being celebrated at SCD Government College in Ludhiana on Monday. Tribune photo

People around the world remembered Sahir Ludhianvi on his 100th birth anniversary today, but sadly his own city failed him as not a single programme was organised here today except at his alma mater, SCD College, where a musical concert was held in his memory.

Another shocking fact is that there is not a single place/memorial dedicated to his memory in Ludhiana even though the renowned poet had embraced the name of the city as his identity.

Interestingly, programmes are being organised abroad and also across the border to mark the birth centenary of the legendary poet.

The University of the Frazer Valley, Canada, is celebrating the occasion online for three days (from March 7 to 9). Similarly, the Lahore Arts Council Lahore and the Karachi Arts Council, Karachi, has organised a two-day online event from March 7 to 8.

Events in connection with the Sahir birth centenary were organised yesterday by the Ghalib Academy, Anjuman Taraqi Urdu Hind, Delhi University and a few other organisations in Delhi and various places in India. Many organisations have planned to celebrate the occasion in the coming days.

“I was the keynote speaker in the programmes organised by the University of the Frazer Valley, Canada, and the Lahore Arts Council Lahore and the Karachi Arts Council, but sadly no programme was held in the memory of the poet in his own city,” said Dr Kewal Dheer, a writer and founder of Adeeb International.

He said his organisation Adeeb International was planning to organise a programme but could not get the green light due to the Covid restrictions.

“The saddest part is that there is not even a single site in Ludhiana dedicated to the great son of the soil. There was a plan to construct Sahir Cultural Centre and the foundation stone of the same was also laid, but sadly it was scrapped and later it was planned to construct residential flats-cum-shops,” said Dr Dheer, who was also the secretary of the Sahir Cultural Society which is now defunct.

Dr Dheer said that Rs 65 lakh was released by the then Chief Minister Beant Singh in 1995 for the construction of the centre, but unfortunately he was assassinated the same year and the idea of the cultural centre was sacrificed. In 1998, the funds lying in the bank in the name of the Sahir Cultural Society were returned to the government as unutilised.

Dr Dheer wishes for a memorial in the name of the great poet.

Major Amarjit Singh Batth (retd), a writer author and columnist, said the poet took the city to international level, but the city has failed to remember him.

“He might be living in the hearts of lakhs of his admirers, but we have nothing to show to the next generation. The cultural centre planned in his memory was also lost in oblivion,” he rues.

Dr R Vatsayayan, an ayurvedacharya who has also studied at SCD Government College, said only his alma mater had acknowledged him and named an auditorium and a botanical garden after him, rest there is no memorial in his name.

The road from Fountain Chowk to Rose Garden was named as “Sahir Ludhianvi Marg” and a foundation stone was also laid, but sadly after a week, the board was uprooted and even the foundation stone is nowhere to be seen.

“The cultural centre named after him was also scrapped. He took the name of Ludhiana along with him wherever he went, but the city has failed to do justice to this great man. Whenever I tell anybody that I am from Ludhiana, people ask, “From Sahir Ludhianvi’s city”? But sadly, the city has forgotten its hero, said Dr Vatsyayan, who also has autograph of Sahir and is taking care of it for the past 50 years.

Meanwhile, a musical concert was organised by SCD Government College in collaboration with the Voice of Asians to commemorate the 100th birth anniversary of its eminent alumnus Sahir Ludhianvi at Sahir Auditorium today, where the International Women’s Day was also commemorated.

The guests paid floral tributes to Sahir and the concert began with his nazam “Mein pal do pal ka shayar hoon”.

Principal, Dr Dharam Singh Sandhu talked about Sahir’s life at length and motivated the students to learn resilience and humility from him. He also read out the nazm that Sahir had dedicated to the college during the golden jubilee celebration “Ey nayee nasl tujho mera salaam”. It is noteworthy that Sahir took up the cause of women empowerment through his poetry which created a sea change in the perspective of society towards women. He also spoke about Indian women who have made the nation proud with their achievements.

Lines penned by Sahir “Kal koi mujko yaad kare, kyun koi mujhko yaad kare, masroof zamana mere liye, kyun waqt apna barbaad kare” seem to reflect the kind of treatment that was in store for him in his city after his death.

Hall likely in his memory