Open House: How should ambulance protest be handled to avoid disruption of the essential service? : The Tribune India

Open House: How should ambulance protest be handled to avoid disruption of the essential service? 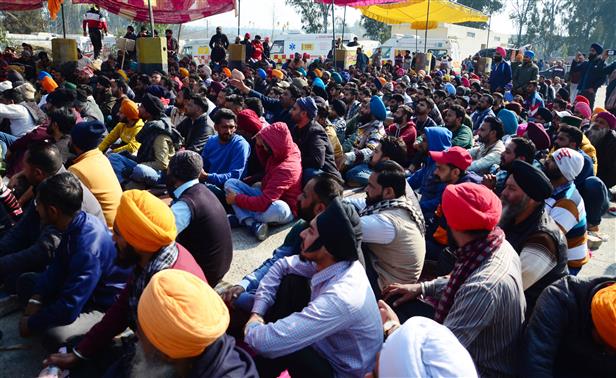 Protesting non-fulfilment of their demands, members of the 108 Ambulance Employees' Association had gone on strike earlier this month, with ambulances going off roads for several days. file photo

Ambulance services are critical in providing pre-medical care during emergencies and maintain a continuum with hospital facilities for a person who requires medical assistance even late at night. The services are so vital that obstructing the path of an ambulance is deemed a crime. If the ambulance staff refuse to provide emergency medical services and continue with their protest, their refusal should also be considered a crime. The protesters should understand that keeping ambulances off the road means missing out on the ‘Golden Hour’, which could otherwise save a precious life. Keeping this in mind, the strike should be declared illegal and violators penalised. The government must also try to address their grievances on urgent footing in order to restore the services.

The Annual Status of Education Report-2022 (ASER) has revealed that school education standard is in dire straits in Ludhiana district. The report has once again highlighted the poor standards of learning and enrolment in government schools in the state's largest district. The enrolment figures of Ludhiana have been found to be even less than the state average. What should be done to upgrade the standard of school education?

Ludhiana is the most populated city in the state and healthcare is a major concern in the region. During emergencies, citizens depend heavily upon ambulance services to reach the hospital premises on time. Ambulances not only play a vital role in saving precious lives, but also make healthcare conveniently accessible to residents. However, the hasty strike that was called recently has baffled patients, creating a ruckus among them. Healthcare is an important area of a state and neglecting it is simply unaffordable in modern society. After winning the assembly elections, the AAP government had made hefty promises. They should now act accordingly as it is their responsibility to pay heed to the demands of contractual employees operating the 108 ambulance services. The government should provide basic amenities to people serving in the sector and give them financial security.

The deadlock because of the protest by 108 ambulance service employees can be removed only if the government adopts a more sympathetic approach and listens to the genuine demands of protesters. Every employee is a human being and needs some rest after work. Restlessness can be a fatal affair in ambulance services as accidents may be caused because of work overload. Therefore, the timing of work by ambulance drivers should be reduced accordingly. The government should recruit more drivers so that they can work in different shifts. The authorities should also raise the salaries of protesting employees. The genuine demands should be fulfilled at the earliest so that the life-saving services can be continued once again.

The 108 ambulance service is available 24X7 in the entire state of Punjab and anyone can have access to it by dialling 108. The ambulance reaches the site within an average response time of 15 to 20 minutes. Emergency medicines and equipment are also provided in the ambulance, besides the presence of a specially-trained Emergency Medical Technician (EMT). Ziqitza Healthcare, the operator of the service, is the employer of a majority of staff working for the ambulance services. Punjab’s 108 Ambulance Employees’ Association has been on strike since January 9 for non-redressal of grievances. As a result of the strike, many patients in the state have been suffering or paying beyond their means for private ambulances amidst the agitation. The government should act tough in the matter and recover the ambulances from the possession of striking union members and hire new drivers in an endeavour to not let the strike affect the vital services. A criminal case should be filed against ‘Ziqitza Healthcare’ and its directors for the inconvenience caused to the patients.

A strike that disrupts health services is always deplorable. More often than not, the government health services are targeted by vested-interest groups. This time around, the staff of ambulance service have been leading the agitation in Punjab. Ludhiana has been among the worst-affected districts. Ambulances play a vital role during emergencies. Pretending some concern for the health of the people, the government should talk with stakeholders and find a creative solution to the problem. Employees should be paid on time and there should be provision of sufficient leaves and other benefits. The ambulances are a property of the government and they should be forcefully recovered from protesters. Temporarily, NGOs and private hospitals can lend a helping hand and ensure that services do not come to a complete halt.

Services should not be affected indefinitely

The government should listen to the demands of the protesting contractual employees and solve their genuine problems. However, at the same time, the protesters should also understand that they cannot disrupt medical services indefinitely as healthcare is an important component of a society’s vital infrastructure and it should not be fiddled with. The protesters should therefore find other ways of pressing their demands and also continue their work side by side. All stakeholders should remember that any delay on their part can mean the difference between life and death for somebody who is ill.

It is very unfortunate when commuters suffer from any jam or traffic diversion due to any strike. Recently, drivers of 108 ambulance went on strike due to their long- pending demand but on the other side serious patients bore the brunt. The best solution is that from any strike in general and strike of doctors, para-medical staff and drivers of ambulance in particular should not disturb public and patients. Big industrialists under the provision of corporate social responsibility (CSR) should donate more ambulances with their own drivers so that patients should not suffer. The district administration and private hospitals must come forward to lend their support to shift patients in these circumstances. On moral ground, drivers of ambulances must adopt another way to deal with their problems but refrain from denying patients to hospitals.

NGOs must come forward for help

Admn should talk to union leaders

The most important thing is to solve the issue due to which they have gone on strike. Their demand for increase in salary and reasonable day-off must be given due consideration by appointing more employees. Shift-based duties must be imposed. After the government’s assurance, the one week old strike was called off. The administration prioritise public health and safety in all situations. They must be made aware of their duty towards society.

The ambulance services should never be suspended. The staff, in case they had any grudges against the government, should have adopted a way of sitting on the table and discussing. They have no right to endanger lives by suspending the emergency services and sitting on a dharna. The government should accept their genuine demands and ask them to join their duties with immediate effect. The strike by the ambulance workers means risking the lives of thousands of people who may have breathed their last due to the absence of first aid.