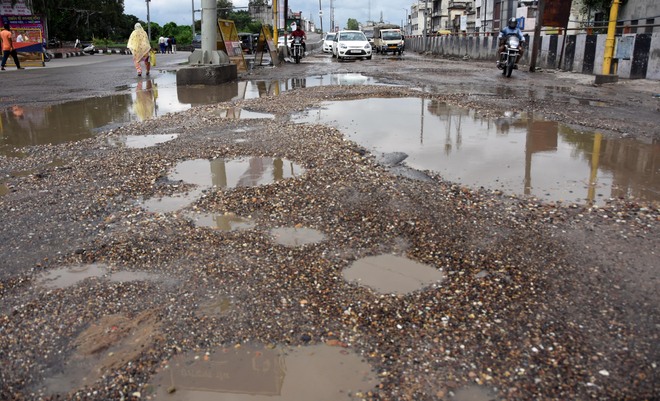 A road in poor shape in Ludhiana. Photo: Ashwani Dhiman

OPEN HOUSE: What should be done to improve the condition of city roads?

A high percentage of poor condition of roads is the result of corruption in the MC. Leaving aside a few posh areas in the city, roads are needed an early repair. Every year funds are allotted but due to unethical ways money is not spent. This money is divided among unscrupulous individuals and roads remain the same. This becomes the main cause of accidents in the city. Due to intriguing carelessness of the district administration some roads have become prone to accidents. To improve the condition of roads stringent punishment is needed, more public participation is required, honest officials need to be honoured.

Many accidents occur every day due to poor maintenance of roads in the smart city and as a result, some citizens lose their lives. All-out efforts are required to draw the attention of the Municipal Corporation to the maintenance of all roads in the city. One effective way is that some affected individuals take the matter to the court and file a suit against the erring body to teach its officers concerned a lesson by getting them fined for negligence, as is happening in many advanced countries in the world. The courts decide the cases on merit and impose heavy penalties on the agency concerned. This practice must start in the country at the earliest.

Authorities should be held responsible for mishaps

Many residents lost their lives due to potholed roads. And these deaths should not be termed as accidents because they were not accidents but offences done by authorities and people who were responsible for the poor conditions of these roads. Hence, they need to held accountable towards their responsibilities and should be punished if they failed to do so as their negligence costs thousands of innocent lives. The government also needs to be serious towards road safety and conditions of roads. They should conduct regular surveys so that they can repair the roads which need utmost attention. Efforts should be made to aware the residents about the details of upcoming and ongoing road projects, the name of the contractor and his company to evolve a sense of liability. The government should strive to develop a website dedicated to the redressal of grievances against poor condition of roads where residents can upload pictures to bring speedy action. It should be mandatory for the contractors to mention the lifeline of the road they intended to construct in their submitted tenders and should be penalised if the road get fractured or damaged before its due time.

Among all four types of transportation systems, roadways is considered to be the most important and useful system as it carries maximum transaction of goods and human passengers. A well organised network of roadways speaks to the nature and development of a particular region, city or state. But the shapes of our roads, particularly of Ludhiana city, are in dismal state. If we want to get rid of the problems of roads in our city then roads should be carpeted after every five years through proper planning and with proper execution of plans. Every facility such as sewerage, water supply or even telephone connections and electricity supply should be provided before carpeting the roads to avoid wastage of resources and other patch work.

Poor road facilities make it more difficult for area residents to move out of their houses. Waterlogging is one of the major problems of the urban areas. Residents of Jamalpur Road in Ludhiana are facing real trouble. In rainy season, water gets accumulated on roads. The authorities need to look forward and rebuild the roads and create proper sewerage system that the water from potholes don’t create foul smell. Even sometimes when you cross that road many people are unaware of the potholes in the centre of the road and gets smashed into it. The potholes must be filled and security of residents must be assured.

It is a bitter truth that many roads of Ludhiana are in bad shape. Their condition deteriorates during rainy days. Pothole-riddled roads lead to accidents. Well before this season all roads should be perfectly carpeted with the best concrete mixture after filling all pits and cracks so that no water stagnates over the roads and incidence of accidents comes down considerably. The side drains must also be cleaned as well as propery cleaned before the rainy season. The zebra crossing and edge lines should be very clear. Ideally all main roads must have pedestrian paths.

I think that we Indians have so much patience to tolerate each and every evil and problem prevalent in the society. It may be in the form of violation of rights, corruption, irregular supply of water and electricity, bad road conditions and the list is unending. Due to the bad conditions of roads, it is not only the public that face problems but it has a bad impact on the health of the economy. Every year residents face the problem of roads as the condition becomes worse after monsoon. In the majority of areas roads have big pot-holes and it becomes too difficult to move. There must be a concrete plan for carpeting roads. There must be one inspection team to inspect conditions of roads area wise and should report to councillors of that area. Then nobody should be allowed to dig the road after its carpeting. Proper drainage facilities on both sides of roads should be there. Stray animals should be prevented from moving on roads.

The pitiable condition of roads in the city is an open invitation to mishaps. Potholes on the roads are crying for attention. The roads are being constructed with substandard material that is why the roads break early. Strict action should be taken against the erring officials and contractors. The testing of the material should be done regularly.The firms should be accountable for maintaining the road for a period of 10 years. Road signs must be visible in the night, crash barriers should be in the right place and road edges and lanes should be well marked. The broken covers of sewer manholes should be immediately replaced.

There are many areas in the city where the condition of roads is pathetic. At some places the roads have vanished and the paths look like kacha roads generally find in villages. The Municipal Corporation should get to some serious work and start road carpeting immediately after the monsoon season. This will not only save the precious lives but also streamline the vehicular movement. Already the city is reeling under the stress of poor traffic problem due to a number of construction works going on in the city and uncarpeted roads in the remaining part of the city add to the woes of the commuters. So something concrete must be done at the earliest to carpet the city roads.

Good quality roads and infrastructure are very essential for the development of the city. No doubt, authorities are paying attention on infrastructure by constructing bridges and flyovers but there is a great negligence on their part as far as roads are concerned. In the rainy season, city faces worst condition. Even sewerage overflow is common in the city which adds dirt to the worst condition. Dumping garbage on roads also leads to the destruction of infrastructure because various animals surrounded the roads and accidents happen. Authorities must pay attention on the good quality roads. Contractors must be held responsible for the maintenance of roads for a particular period of time. Quality should not be compromised at any cost. Government should also fix a place for dumping the garbage.

The authorities should depute an officer to keep a check on the condition of roads. The responsibility should be fixed and there should be a common communication channel to make that officer get the information about broken roads from city residents. The names of respective road contractors with contact details should be made public on website. The transparency will improve the system and weed out corrupt elements. Roads being soluble in rainwater is typically because of water stagnation as design and material are not verified at the time of construction. Water accumulates on uneven constructed roads leading to damages during rains.

Bad roads adversely affect the people in countless ways and thus make them poorer. Digging of roads from anywhere for cable and water connections without taking permission from municipal corporations is pitiable. Road contractor should be held responsible for the maintenance of the road for three years and then three years additional warranty. There should be online complaint registry for each road and contact details of the contractor. The construction company should be penalised for poor construction of roads.

Take steps for disposal of rainwater

The main reason behind poor condition of roads is accumulation of rain water for a longer period of time due to improper disposal of rainwater. The depleted roads cause sheer inconvenience to commuters as well as city residents. The MC should take necessary steps for proper disposal of rainwater. This method might prove boon for commuters, local residents and also reduce the accidents on roads.

Regular cleaning of roadside nullahs and high quality of road material should be priority of the MC. Employees of the PWD should be motivated for early repair of roads and potholes. Allocation of road work should be allotted in a transparent way.

Roads in India are in a miserable condition. The very first responsibility of officials concerned is to make need-based roads, pavements, humps, speed breakers and traffic lights. Ditches should be immediately filled. Moreover, citizens must try their best to keep the roads in favourable conditions and follow the traffic guidelines. properly.

Even as the deadly Covid virus has almost died down, at least for now, the dreaded dengue fever has started spreading its tentacles. With no dedicated treatment arrangements for dengue patients at government facilities as yet and no fogging to check breeding of mosquitoes and flies, the patients are forced to fend for themselves and the situation may soon turn grim. What should be done to avoid the situation turning out of control? Suggestions in not more than 70 words can be sent to ludhiana.feedback@gmail.com